Heidi Klum and Seal spotted kissing: Are they back together?

Heidi Klum and Seal back together? OK, we're getting a bit ahead of ourselves here, but a little love hope never hurt anybody. Heidi Klum and ex-husband Seal reunited Saturday with a kiss. The former lovebirds seemed to put their differences aside for their daughter's 4th birthday...

Supermodel Heidi Klum and Seal shared a kiss on Saturday as they reunited in Malibu for Lou's birthday shenanigans.

The pair were celebrating Lou's fourth birthday when photographers spotted the two sharing a intimate kiss together, sparking false allegations that the pair might be getting back together.

Heidi was also seen being affectionate with her ex-hubby as she brushed off his shoulders, a move which is pretty intimate and wife-like.

Seal, 50, held a sign that read "Lou's" as him and Heidi cheerfully walked over to little Lou's birthday party.

​The estranged couple looked happy as they walked side by side, proving that any hard feelings either of them had have finally been buried.

The birthday girl was dressed up to match the princess theme and look in high spirits with a super-cute lilac dress.

After 7 years of commitment Heidi and Seal's marriage fell apart in 2012.

But amidst a string of infidelity rumours, the former couple have still managed to keep a healthy friendship.

Shortly after parting ways the couple said in a statement: "We have had the deepest respect for one another throughout our relationship and continue to love each other very much, but we have grown apart."

The Kiss from a Rose singer claimed last year that the reasons for their divorce led back to Heidi cheating on him with "the help".

By that he meant her Bodyguard, Martin Kristen, though his comments were denied by Heidi.

Slamming his accusations, Heidi said to People.com: "Our separation was based on issues between the two of us", adding "Seal has moved on and so have I..."

She continued: "I cherish all of the great memories Seal and I created together over the years. My priority has and continues to be protecting and providing for our children."

The couple - who have three children together, sons, Henry, Johan and daughter Lou - tied the knot in May 2005 at Seal's beachfront home in Mexico.

So maybe it's not the sort of reconciliation we all hoped for, but we're still super happy that after a million dollar divorce battle the couple have seemed to settle things amicably!

What do you make of it? Tweet us @wewomenusa 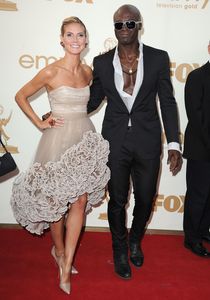 by the editorial team
+
All the news about Heidi Klum