Three years ago nip-tuck junkie, Heidi Montag famously went under the knife for nine plastic surgeries including a new pair of F-cup breasts. The Hills star has opened up about the procedure and raves about her new smaller lady lumps...

The blonde beaut had her breasts redone in a six hour procedure early last month after suffering from a number of problems with her "bowling ball" breasts.

Weighing a back-aching 3 pounds each, the reality star said: “ I couldn't conceptualise the weight of them in my body...

They were so huge in fact, they were causing her back and neck pain as well as numbness in her arms too. Luckily reconstructive specialist, Jay Orringer persuaded her to have them replaced.

“He told me they were falling through the bottom, and I got scared. It's super dangerous. They can fall through to your belly button!”

There was no second thoughts after hearing that. Heidi almost immediately booked the procedure and now she couldn’t be more pleased!

The former Celebrity Big Brother star also filmed the surgery for US show Entertainment Tonight, but it will be far less shocking than her People magazine cover in 2010 where she underwent a slew of procedures.

ET host, Brooke Anderson tweeted a photo of them pre-op last on October 4.

We r in the OR w/@HeidiMontag tn on @ETonlineAlert as she downsizes from F breasts to D for health reasons! pic.twitter.com/KcAP2D7pbr

In 2012 she expressed regret in an interview with Access Hollywood.

She said: "I would never do it again and I never recommend it for anyone … I kind of wanted a few enhancements and then it got out of hand.”

"I wasn't told really the repercussions and what would happen, emotionally and psychically and the pain I would be in. I was kind of in shock.”

We’re glad this time around the plastic surgery spectacle went under the knife for good reasons!

What do you think of Heidi’s new modest boobs? Do you think she made the right decision? Tweet us @SofeminineUK 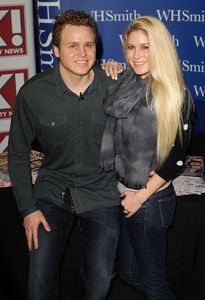