Is Jennifer Aniston's fear of marriage delaying her wedding to Justin Theroux?

Jennifer Aniston and Justin Theroux have been engaged for over a year now and we almost can't believe they're still not married. The Hollywood couple have told the press there have been no delays or changed dates, but that still makes us wonder - why the hold up? Turns out it may all be down to Jen's apprehensions about marriage after what happened between her and Brad Pitt.

We're all rooting for Jennifer Aniston and Justin Theroux but we can't believe they haven't got hitched yet!

The couple got engaged over a year ago and have seemed on cloud nine ever since hooking up back in 2011.

But it seems how happy they are now is holding them back from tying the knot.

Jennifer is reportedly concerned that marriage will change them and potentially ruin their relationship.

After everything that happened with Brad Pitt she's scared that they'll go the same way.

She expected her marriage to Brad to be for life and the way it fell apart has left her sceptical about the effect marriage can have on a perfectly happy relationship.

A source told Heat magazine: "Jen loves Justin and really wants to be his wife, but she has an overwhelming fear of it ruining their relationship.

"She's now having therapy and using meditation to help with the wedding anxiety.

"Brad [Pitt] was the love of her life and it ended up in such a bitter public divorce - it's scarred her."

After spending so much time as half of a couple that didn't work out, Jen would have told herself: "Understand who you are. Educate yourself on the self.

"You can undo a lot of things. If you're not happy, you can become happy."

Sounds like she's doing all she can to get on board for her second shot at marital bliss.​

It had been previously believed that the cause of the delay of their wedding had been down to work commitments and Justin dragging his heels.

There has also been apparent debate over where the couple should live once they're man and wife.

Jen is a California girl while Justin loves New York.

It seems geography could be the least of their worries! What do you think? Tweet us @SofeminineUK 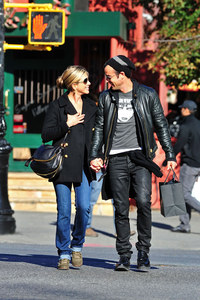 Francesca Menato
…
coupleWedding
From hair ideas to outifts, look no further for your daily inspiration