'It's My Body, It Should Be My Choice': Jennifer Lawrence Describes Naked Photo Leak As A 'Sex Crime'

Jennifer Lawrence was silent after naked photos of her were taken from her iCloud and leaked online, but now the star has finally spoken out about her reaction, and she's come out fighting. The 24-year-old spoke to Vanity Fair about her fury at the person who leaked the photographs, the way it was handled by the media, and her contempt at everyone else who decided to click on the photos, for taking her privacy away.

Back in August hundreds of nude photos of various celebrities were leaked online, after iCloud was hacked. Any sane person can see that this is a huge violation of the right to privacy and a sexually aggressive act that left all victims vulnerable.

But, be honest - when you heard about the nude photo leak did you hunt down the photos? Curious to see what the fuss was about? Many did. At sofeminine we didn't. We made a decision not to contribute to the problem. We didn't want to add to the feelings of violation and humiliation that the victims must have been going through by clicking on something that was never meant to be consumed by the public. We wish we could say the same for our boyfriends.

Whichever way you look at it, the hacking and distribution of personal photographs is an act that is meant to disempower the victims, and after months of silence, Jennifer Lawrence has spoken out about her reaction.

In an interview with Vanity Fair magazine she described the act as a "sex crime."

Can we just take this moment to say we completely agree with her?

Finally, the Oscar-winning actress made it clear that not only were the photos a violation, she also considered it to be a crime: “It is not a scandal. It is a sex crime. It is a sexual violation. It’s disgusting. The law needs to be changed, and we need to change. That’s why these websites are responsible.

Prior to the photo leak, Jennifer had already been vocal on her disgust for the media on all things from weight shaming to invading privacy. As a high profile woman in the media, she's not afraid to give her opinion on the way the fame industry treats females, and we love her for it. Here are some of her most inspiring quotes.

Jennifer Lawrence is ready for change, and so are we. ​ 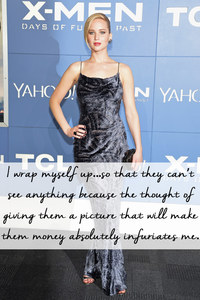