There are often a few kinks to iron out before settling down with someone and it seems one of Jennifer Aniston and Justin Theroux's was more bizarre than most. The actress has apparently told her future hubby to ditch his weird art - and by weird we mean super-weird. Justin was the proud owner of waxworks of diseased throats as well as a collection of old teeth. We're with Jen on this one.

Jennifer Aniston has told fiancé Justin Theroux that his strange art collection is banned from their home.

The couple have been engaged for over a year and are giving nothing away as to when they'll finally get hitched, but it seems they need to sort out their interior design differences first!

Justin has a combination of waxwork figures of diseased throats and old teeth that a dentist has saved for him over the years.

Justin, 42, told GQ: “They’re open mouths with tongues and in the throats are different stages, labelled, of syphilis and gonorrhoea.

"I also have a dentist who saves [teeth] for me. People think they’re little mints. They weren’t going to be above the fireplace any time soon.”

If he's got teeth on display, imagine the skeletons in the closet - or maybe it's a full disclosure situation...

Either way, Jen, 44, is having none of it and has demanded they be removed from the house. And we certainly don't blame her.

Hopefuls for the lovebirds have nothing to worry about - the collection hasn't seemed to cause any real problems for them.

They are happily living together in Jen's LA mansion, where it's been suggested they may eventually tie the knot.

One issue the couple have faced is the constant media attention around their nuptials, with many speculating they'd postponed their big day.

Justin explained the experience was akin to "going to a slightly different altitude, you know?"

So, now that the weird throats and teeth are gone, what could possibly be stopping them walking down the aisle? 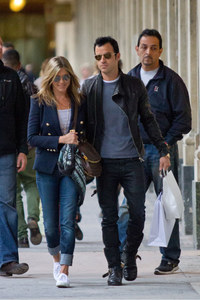