Jennifer Aniston and Justin Theroux have sparked fresh rumours that they're expecting their first child together. 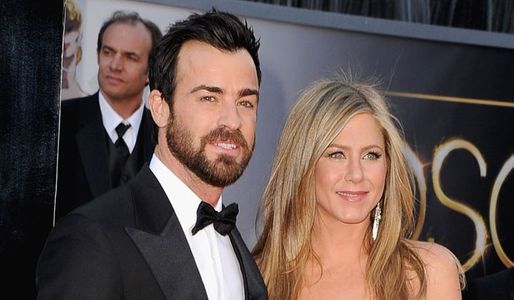 The Hollywood couple, who got engaged in August last year, looked totally loved up at the Oscars in LA on Sunday night.

And many believe that the couple had the glow of parents-to-be after Justin, 41, was snapped placing a hand on Jen's stomach.

The photo sees Justin protectively holding Jen's tummy as she smiles coyly at the cameras.

This isn't the first time the former Friends actress has faced rumours she might be pregnant.

Jen, 44, was forced to deny she was expecting at the end of last year after she was pictured wearing baggy clothes and seemed to be covering her stomach with a scarf.

She was said to have backed out of two upcoming movie projects - Getting Rid Of Matthew and Miss You Already - and completely emptied her diary, with many believing it could be because she was pregnant.

Further speculation that Jen could be preparing to be a mum came after her teetotal night at a party she hosted with actor Justin.

A close source told the Daily Mail at the time: "They had a margarita bar, but she didn't go near it, opting for water instead. It was so unlike her and didn't go unnoticed.

"She was also picky with what she ate, and didn't touch the huge sushi platter, which is one of her favourite foods."

But the Marley And Me star's spokesman quickly dismissed the rumours as "crap".

Jen and Justin met on the set of their movie Wanderlust in 2011 and it wasn't long before they were living together and ready to be husband and wife.

Nonetheless, the actress recently admitted she wasn't expecting Justin to proposed when he did.

She told People magazine: "It was one of the sneakiest jobs I've ever seen. I had no idea."

Jen added: "I didn't know what I wanted for a ring. He just knows what I like."

Check out Jen and Justin and all the other Oscars 2013 red carpet arrivals...