Jennifer Aniston pregnant rumours: Actress has been "trying for a baby for a year"

Jennifer Aniston is rarely out of the headlines these days. Now the actress has found love and settled down with Justin Theroux, their imminent wedding is on the tip of everyone's tongue. But not just that - the actress is constantly fighting off rumours that she's pregnant. So how does she really feel about the prospect of becoming a mum?

Jennifer Aniston has reportedly been trying to get pregnant for more than a year.

The media is constantly speculating that Jen and her fiancé Justin are expecting, which only makes the situation more difficult for the couple.

A source told MailOnline: "It's starting to be a source of irritation for Jen."

Jen and Justin got engaged in August 2012 and though they still seem in no desperate rush to get married, they've apparently been trying for a baby since Justin proposed.

The source continued: "Jen purposely left her work slate clean for the next few months to prepare for motherhood.

"She puts a brave face on the rumours, but it masks her desperate desire to be a mother."

It was only earlier this week that Jen, 44, was forced to deny the latest rumour she was pregnant.

Us Weekly made the claim with a picture of Jen grinning and the cover line "Jen's Big Secret - Pregnant!"

It then teased: "After years of trying, she's finally going to be a mom at 44. How she's prepping for a baby - and a wedding!"

But, like ever, the actress' rep was quick to deny the reports.

They said: "Jennifer is not pregnant."

Well that clears that one up.

Meanwhile, Jen and Justin’s hectic schedules are said to be pushing back the date of their wedding, which was originally planned for Christmas. 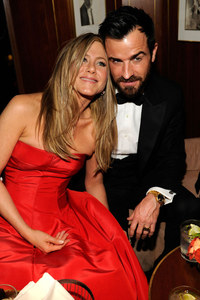 Justin, 42, recently landed his first high-profile leading role in HBO series The Leftovers and it looks like the channel will be ordering a full season of the show.

So the pair are thinking of pushing back their big day to spring 2014.

A friend told MailOnline: “Jen's completely understanding of Justin's opportunity to elevate his career to another level and prepared to wait though friends are starting to question whether they'll never make it down the aisle!”

She said: “We just want to do it when it’s perfect, and we’re not rushed, and no one is rushing from a job or rushing to a job. And, you know, we already feel married.

Esme Riley
…
#Pregnant
From hair ideas to outifts, look no further for your daily inspiration