Hot mama! Jessica Simpson stepped out for a triple date recently with fiancé Eric Johnson, sister Ashlee Simpson and her boyfriend Evan Ross, best friend CaCee Cobb and her husband Donald Faison. The group dined at Mastro's Steakhouse in Los Angeles. Jess stunned in a tight black dress that showcased her post-baby figure - her son Ace was born only four months ago!

Jessica Simpson has always been famous for her figure. When she first arrived on the pop music scene in the late 90s, she was a blonde bombshell with a big voice and a teeny tiny waist. Over the years, her weight and shape have fluctuated drastically, which is to be expected as Jessica is now a mother of two. What's never changed, however, is the press' infatuation with the singer's body. So it's no surprise that the bandage dress she donned on date night caused quite the stir. We think Jess looks fab!

She's no stranger to critics, however. If you remember, she was chastised back in 2009 for a pair of high-waisted jeans she wore that really highlighted her curves, perhaps not in the most flattering light.

​She put on four stone when pregnant with her first child, Maxwell, and was again slaughtered by the press.

​She's since admitted that she ate whatever she wanted and didn't pay all that much attention to her fitness regime at the time. She worked out three times a week during pregnancy #2 and only gained two stone.

Jessica wrote in a guest post for Parents.com, "My pregnancies (especially my first with Maxwell) were well documented and my struggles with my weight and body image have played out in front of the world. As hard as that has been, the hardest part is to realise that with all the hurtful and harsh criticism from others, I have been the hardest on myself."

She goes on to say that she doesn't want her daughter to grow up seeing her mother beating herself up for the numbers on the scale or making bad food choices.

​"I want her to know her value, rather than spending her energy fighting negative voices from within. I want to teach her to figure out what is truly right for her rather than worrying about what anyone else thinks.

"The world will try to fit you into a mould, but carve your own path."

​These words of wisdom are a far cry from the ditzy twenty-something who didn't know the difference between chicken and tuna (on MTV reality show Newlyweds with first husband Nick Lachey) that the world viewed her to be a decade ago. She sure sounds like a bright spark now!

Do you applaud Jess' view of ignoring the press? Tweet us @sofeminineUK! 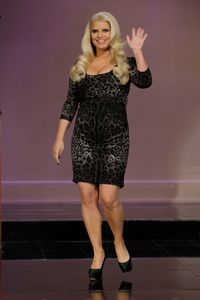