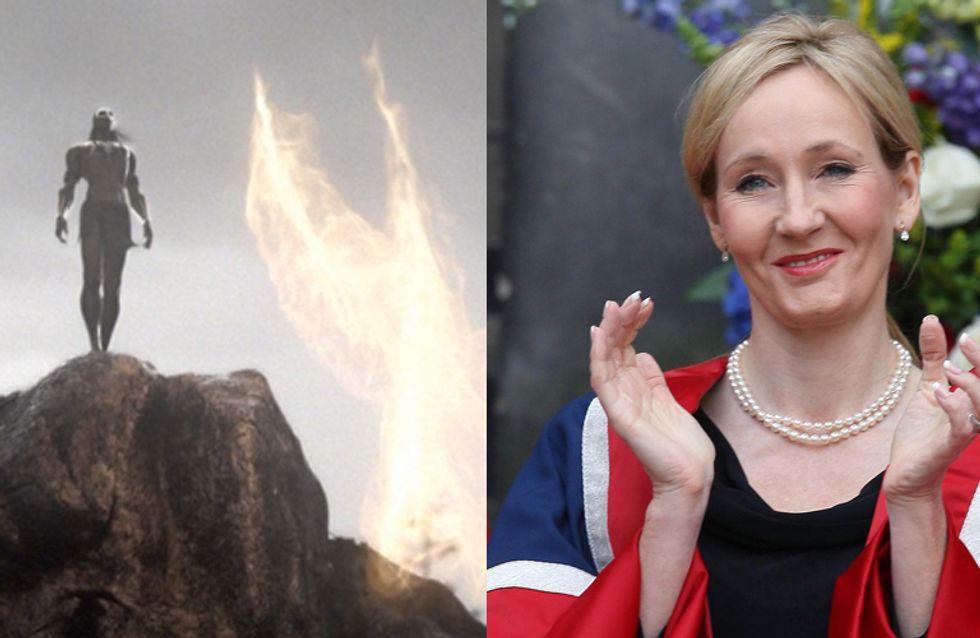 Although the Harry Potter series is as decidedly British as Stephen Fry eating a crumpet while watching cricket, it was only a matter of time before JK Rowling began to reveal tidbits about magic from other cultures. For the upcoming release of the movie Fantastic Beasts and Where To Find Them, which is set in New York City, Jo is releasing info about American magical history. Now all we Brits can do is grumble into our cups of tea and catch up with Jo's amazing stories...

It all began with a movie trailer that even the most deerstalker modelling, pipe smoking English Gent will admit did make Jo's new stories sound seriously intriguing...

Although the Harry Potter series was put to bed in 2011, every Potterhead knows that the things we love have a way of coming back to us in the ways we least expect, and so it was hardly surprising when Jo announced the creation of Pottermore, a site where she would continue to post original tidbit stories about the world she has created, and the movie version of JK's spinoff book for charity, Fantastic Beasts And Where To Find Them. Since the movie was to be based in NYC, it seems that Jo had the bright idea to use Pottermore to give that magical community some context. After all, since Voldemort was pretty much only interested in terrorising the UK, they must have had their own problems, right?

The stories will include the history of Skin walkers (a Native American legend), the American magical school Ilvermorny, and the Ministry of Magic equivalent: the Magical Congress of the United States of America. However, the first story has already been released, and briefly covers the fourteenth to seventeeth century of magical US history. Here's what we learned...

Wizards knew about North America WAY before muggles found it

Duh, how could they not have! JK wrote "Various modes of magical travel – brooms and Apparition among them – not to mention visions and premonitions, meant that even far-flung wizarding communities were in contact with each other from the Middle Ages onwards."

In the Native American community, witches and wizards were either revered of feared as malevolent spirits

The same as in the Harry Potter books, sometimes magic is hereditary and sometimes it appears out of nowhere, with a witch or wizard being born into a muggle family. While some witches and wizards were accepted by their communities, others were outcast: "In the Native American community, some witches and wizards were accepted and even lauded within their tribes, gaining reputations for healing as medicine men, or outstanding hunters. However, others were stigmatised for their beliefs, often on the basis that they were possessed by malevolent spirits."

"A legend grew up around the Native American Animagi, that they had sacrificed close family members to gain their powers of transformation. In fact, the majority of Animagi assumed animal forms to escape persecution or to hunt for the tribe. Such derogatory rumours often originated with No-Maj medicine men, who were sometimes faking magical powers themselves, and fearful of exposure."

Yep, although she has claimed it to be extremely difficult, JK revealed that Native American witches and wizards excelled in magic without using wands. Ah if only James and Lily knew how to do that, ey? Too soon?

As you can imagine, fans of the series were pretty delighted by the new arrival of these stories, and naturally treating the whole thing extremely seriously.

@pottermore @jk_rowling It is INCREDIBLE! I'm so excited for the other stories, and i hope JK is gonna write about Brazil stories! LOVED IT!

Saw that @jk_rowling is releasing stories called The History of Magic in North America and I started crying. Hi, I'm 35.