Julien Macdonald is the third celebrity to get the boot from Strictly Come Dancing. Despite loving the sparkly dancers’ costumes, the Welsh fashion designer clearly found it too much of a challenge to pick up the steps. After a dance-off against television presenter Rachel Riley, the Strictly judges thought it was high time Julian left the dance-floor and returned to his design studio.

Fashion designer Julien Macdonald was given the boot from the Strictly Come Dancing, after yet another disappointing performance.

While he’s a vocal fan of the show and loved the costumes, the Welshman found it a struggle to pick up the routines and found himself in the bottom two for the third week in a row.

Although he’s clearly improved since the start of the BBC1 ballroom dancing show, Julien’s salsa to The Spice Girls’ Spice Up Your Life wasn’t enough to win against Countdown presenter Rachel Riley.

Clearly disappointed to be given the axe, the sequin-loving designer tweeted: “Thanks for all your support guys - so sad to be leaving, I've loved every crystal encrusted minute of @bbcstrictly #scd”

He added: “Thanks to everyone who voted #TeamSparkle unfortunately the crystals weren't enough to keep us in one more week but I've had THE BEST time!!”

Julien’s parter Janette was keen for everyone to know how hard he had worked, admitting: “I don't think I have ever met anyone that has put in more hours to try and make it happen. I am so glad I had Julien as my first partner on Strictly.”

Meanwhile Strictly judge Bruno Tonioli also hit the floor – but for all the wrong reasons.

The flamboyant Italian fell off his chair live on TV in a fit of hysterical laughter after fellow judge Craig Revel Horwood told Rachel Riley to “clench her buttocks.”

Len Goodman fired back at Craig, who is about to have an operation on his pelvic region, giggling: “You’ll be clenching your buttocks tomorrow when they do your hip.”

Bruno couldn’t contain his laughter, fell off of his chair and then appeared to fall again as he struggled to get back up.

We think it's the funniest moment of Strictly 2013 so far! Do you agree? Tweet us @SofeminineUK! 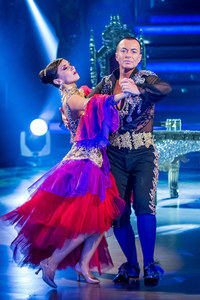