Kanye West has said that he thinks his relationship with Kim Kardashian is a “love story for the ages”. No snickering please, this is serious stuff! The rapper chatted about their relationship in a radio interview yesterday and he also mentioned how he was snubbed by luxury fashion house Louis Vuitton when he tried to arrange a meeting. Argh, this man!

Kanye West has opened up about his relationship with Kim Kardashian during a radio interview.

Speaking to host Angie Martinez for Hot 97 yesterday, Kanye chatted about his Keeping up with the Kardashians fiancée and their relationship, as well as a supposed snub he received from Louis Vuitton’s vice-president.

He said: “I loved her from the first day I saw her, which I said on Bound [his new single], I don’t remember when that was. I remember seeing pictures of her and Paris Hilton in Australia and I came to Don C. and I was like, ‘Man, have you ever seen Kim Kardashawn?’”

“Our love story’s a love story for the ages. I felt like when we first got together, it was like a Romeo and Juliet kinda thing.”

Really?! Kanye you do take yourself so seriously! You’re a rapper and she’s a reality TV star who made a sex tape!

But apparently it is their star-crossed careers that make their relationship one for the history books as the All Falls Down rapper continued: “It’s like she’s a reality star and I’m a rapper, and people talking about how our brands connect and what doesn’t fit and I’m just so tired of the conversation of brands.

As if Kanye’s Shakespearian tragedy love life wasn’t enough, the 36-year-old also moaned about other aspects of his life, namely Louis Vuitton’s lack of cooperation when he wanted to meet with the vice-president for absolutely no apparent reason.

Sorry, what?! That doesn’t answer the question at all! He just stated that merchandise only sells in January then smugly reiterated the suggestion they meet up, like he’s volunteering as the world’s most annoying sales assistant. We’re confused.

So is he a loved-up Romeo? Is he a misunderstood Hamlet? Or is he just a really strange guy? 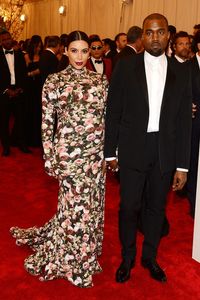