Oh dear. Kanye West might have gotten himself into seriously hot water after apparently punching an 18-year-old man who shouted racial slurs and profanities and Kanye’s fiancé, Kim Kardashian. We know that this is totally unacceptable behaviour, but so is violence. Use your words Kanye

Kanye West has landed himself into a spot of bother after allegedly having attacked an 18-year-old who shouted racial slurs and profanities at Kim Kardashian.

According to TMZ, Kim Kardashian was visiting a chiropractic office in Beverly Hills when she was swarmed by paparazzi, a sensation we’re sure she’s used to. However, a young man in the crowd reportedly tried to support the reality TV star – though definitely in the wrong way – and said: “F**k these fa**ot-ass n****rs”, referencing the paparazzi who were surrounding Kim. 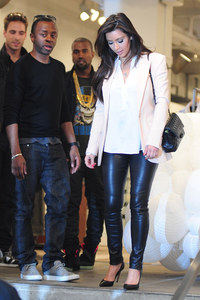 However, Kim didn’t think to think the language was appropriate even in an expression of support, and told the young man that he shouldn’t use the N word. She’s such a mother nowadays! However, the man responded badly, replying: “F**k you b**ch. Just trying to help you. Shut up n****r lover, stupid sl*t.”

Apparently the 18-year-old continued to harshly berate Kim, who called her fiancé Kanye. Once the man realised Kanye was on the phone, he began to shout loud enough for Kanye to hear, repeatedly shouting “F**k you n****” loudly so the rapper could hear down the phone.

Kanye then arrived to help out his fiancé – Kim’s Knight in Shining Armour – where the couple were rushed into the waiting room, but not before he punched the man in the face, as Kim shouted: “we have it all on tape.”

The police were reportedly called to the scene, and according to the New York Daily News, a police officer has said that Kanye has been “named as a suspect by the victim as well as witnesses. He left prior to our arrival and detectives are currently investigating.”

This isn’t the first time the 36-year-old has gotten himself into trouble with his fists, as he was also allegedly charged with hitting a photographer at LAX airport last year.

Do you think Kanye should have hit the guy? Tweet us @sofeminineUK