If you thought the Royal Family’s role was to look great, to smile and wave at official events AND be paid an absolute fortune for their efforts, you’d be RIGHT. The Royal Family has released it’s Annual Review and from the figures it doesn’t look like our favourite Royal couple are going to go hungry any time soon!

The Annual Review, described as “a summary of the work of The Prince of Wales and The Duchess of Cornwall", records Prince Charles’s expenditure, staff and sustainability along with how they are funded, with a certain sum going to his sons and daughter-in-law, Will, Harry and Kate.

So, how much did Charles earn this year? According to the review, Charles brought in an INSANE £19.8 million from the Duchy of Cornwall, an estate “comprising agricultural, commercial and residential property mostly in the South West of England.” He also ‘earned’ 1.7 million in Sovereign Grant (an allowance given to the Royal Family by the Government. Good one).

According to the review, Charles uses most of this income to cover all of the family’s public and charitable work. To be fair, the in last year alone Prince Charles has attended over 600 official engagements. That’s almost two a day! He’s working for his money like the rest of us, people!

As for the Duke and Duchess of Cambridge, according to the report, £2.9 million of Charles's profits went to the funding of official activities of Prince William, Kate and Harry. No wonder Catherine can afford all of those fascinators! The girl married WELL.

Since Kate is the only one putting the Royal money to good use by giving our Pinterest boards inspiration with her incredible outfits, check out our favourite pieces from the Duchess herself… 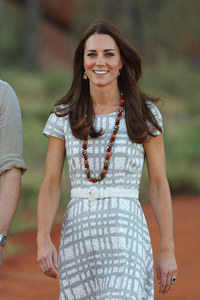 What would you do if you earned millions a year? Tweet us @sofeminineUK