Life as a royal sounds exhausting! Baby George only came into the world in July but already Prince William and Kate Middleton are making plans for his first international trip. The Duke and Duchess have applied for their son's first passport in preparation for a trip Down Under. Wonder if it's gold-plated?!

He's only two months old, but already Prince George is set to travel the world.

Kate Middleton and Prince William have reportedly applied for their baby's first passport as they prepare for their royal tour.

The Duke and Duchess, both 31, are expected to travel to Australia and New Zealand next year - and they'll be taking their heir with them.

Wills hinted at the trip last month at the Anglesey Show when he told guests George was "doing really well" before adding: "We are all very hopeful of coming to Australia next year."

Little George's passport will have cost £46 and will note his full title - George Alexander Louis of Cambridge.

His first trip will mirror his dad Prince William's, who went travelling with his parents Charles and Diana at nine months old.

Royal protocol dictates an heir and the next in line to the throne shouldn't fly together, so the Queen had to give permission for Wills to join Charles on the plane.

​She's expected to do the same for little George - especially as the family have already flown together when they visited Balmoral last weekend.

This hasn't always been the case though, as when the Queen herself was eight months old she was left at home in London as her parents flew off on a six-month Commonwealth tour of Fiji, New Zealand and Australia.

But her mother later revealed leaving her baby daughter behind "quite broke me up".

With such travels planned, it seems rather unlikely that rumours Will and Kate are planning for a second baby are true.

Though they only welcomed George on 22nd July, US magazine Life & Style claimed Will and Kate are loving life as new parents so much that they already want a brother or sister for their little boy.

An insider said: "William and Kate are very keen to start trying for baby No. 2.

It all sounds pretty far-fetched to us, but Palace expert Jerramy Fine reckons Life & Style have got it right.

Jerramy thinks the couple want to ensure their children are close when they grow up, so will waste no time in expanding their family.

One step at a time! 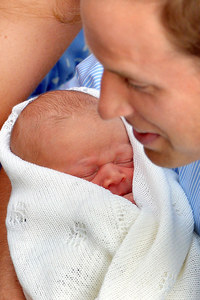