Kate Middleton was reportedly very upset when she heard the news of Nelson Mandela’s passing on Thursday night whilst she attended the Royal UK premiere for his biopic Mandela: Long Walk to Freedom. The Duchess of Cambridge attended the event with her husband William, who was also deeply moved by the sad news.

Kate Middleton reportedly broke down in tears after hearing of Nelson Mandela’s passing.

The Duchess of Cambridge and her husband William were attending the film premiere for the Nelson Mandela biopic – Mandela: Long Walk to Freedom – in London when they were informed at the end of the film along with the rest of the guests that the former South African President had passed away. 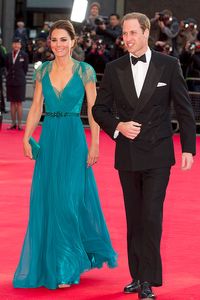 The producer Anant Singh, director Justin Chadwick and actor Idris Elba who portrays Mandela in the film took the stage following the announcement to request a minute’s silence in honour of the anti-apartheid activist.

According to the film’s executive producer, Harvey Weinstein, Kate was especially saddened by the news of the 95-year-old’s passing. He told the Mail on Sunday: “Kate was very emotional, she was in tears and very moved by the events. We all were. There is nothing to describe the momentousness of what happened.

“The Duke and Duchess handled themselves very elegantly. I spoke to them downstairs in the foyer after the movie. William was deeply touched by the news, you could see it in his face, but he was being very courageous.”

William then spoke about it following the screening. He said: “I just wanted to say it’s extremely sad and tragic news.

“We were just reminded what an extraordinary and inspiring man Nelson Mandela was. My thoughts and prayers are with him and his family. It’s very sad.”

As a mark of respect to the civil rights icon’s passing, the premiere’s after party was cancelled as other celebrities paid their respects.

Kate has since thrown herself into her charity work, and was filmed the day after the premiere visiting the Shooting Star Children’s Hospice, where she met the children and even gave one little girl, Demi-Leigh Armstrong, a fist bump and a thumbs up.

Were you sad when you heard the news about Nelson Mandela? Tweet us @sofeminineUK