Kate Middleton and Prince William are making one of the most important decisions as new parents - who will be their nanny. It had previously been reported that Kate wasn't keen on getting help, but it appears she'll make an exception for one with very appropriate previous experience.

Kate Middleton and Prince William are reportedly looking to Jessie Webb to care for their new baby George.

The couple are hoping she will agree to come out of retirement for one very special bub - our future King.

Jessie was William's primary nanny when he was seven years old, before he attended prep school.

She has apparently remained a part of the family's life and has been in attendance at various royal events and celebrations.

She was a guest at William's 21st birthday party and was of course invited to the Duke and Duchess of Cambridge's wedding in 2011.

With such intense media pressure on Kate and her newborn, Jessie is the perfect option and would understand the ins and outs of taking care of such a high profile child.

Kate had previously stated she would not hire a nanny, wanting to look after her son herself.

But with so many royal engagements lined up, there's concern that she would not be able to manage without some extra help.

And Jessie would be ideal as there has been so much trust built up over the years.

Kate is currently staying with her parents in Bucklebury in Berkshire, while Prince William has returned to work as an RAF search and rescue pilot.

They have reportedly planned a trip to Scotland in the next few weeks - George's first holiday! 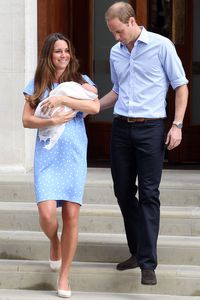