Katie Price has been enjoying bad mouthing her exes recently to promote her new autobiography, Love, Lipstick and Lies, her perfume range and her footwear range. It sounds like it’s all going really well, with 27 people flocking to Tesco last week to get her autograph, but she may have taken it too far this time by insinuating she didn’t think ex-husband Peter Andre is a good father to their two kids. Low blow Katie!

Katie Price has been spreading the bad word about Peter Andre, much to the disgruntlement of everyone. This time she has insinuated that she doesn’t think he is a good father.

​Whoa! Can you imagine if he’d said that about you? There’d be hell to pay!

Whilst on Australian chat show Sunrise 7, Katie was asked if she thought Pete - who is expecting his third child with fiancée Emily MacDonagh - was “a good father.”

​Katie, for future reference, your answer should have been: “Yes. Of course he is, yes.” Instead, the 35-year-old television personality paused before replying “Er…he…seems like he is, he does a show with them, so…I don’t see him or speak to him.”

Really Katie? The two of you divorced in 2009, isn’t it time to let it go?! She completely assassinated his character as well, stating: "I want to disown the man we don’t talk, he’s not the man that I fell in love with. I thought he thought with his heart but now it’s about money and fame.”

When asked whether she was interested in that too, she replied: “I do it myself, I don’t use the children.”

Huh. Think you’re suffering from a seriously selective memory there Katie. The former glamour model posed for OK! Magazine for their October Edition holding her newborn, Jett Riviera, and of course the children were regularly in her and Peter’s reality TV show Katie & Peter.

Her kiddies seem to disagree with her assertion as well, as apparently for Pete’s 40th birthday Princess wrote that he’s the “best dad in the world” in his card. Naw, how cute!

Katie isn’t just getting a hard time for dissing her ex-husband at the moment, as she has also received extensive criticism for jetting to Australia whilst leaving her 13-week-old son at home with his father.

She took to Twitter to defend herself, writing “#workingmum” and “Will miss you all so much!” to her hubby Kieran’s Twitter page.

​A source revealed that Katie is struggling with this choice, saying: “If I don’t work my career is over; if I do, I’m a bad mum. I can’t win.”

You could pull a Beyonce and jet set with your baby too Katie!

Do you think Katie’s in the wrong? Tweet us @Sofeminineuk 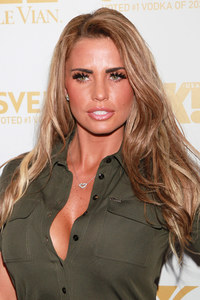