Uh oh! It looks like Kelly Rowland’s romance with her fiancé Matthew Mosshart is over, after a representative for The Osbournes reality show star confirmed that they had broken up after their two-year relationship. Aw, poor Kelly, we really thought they were great together!

Kelly Osbourne’s engagement to Matthew Mosshart has been called off.

The Fashion Police co-host confirmed that she and her vegan chef fiancé have broken up after being together for two years. Kelly’s representative described the split and “amicable” and that the couple: “continue to have nothing but the utmost respect for one another.” 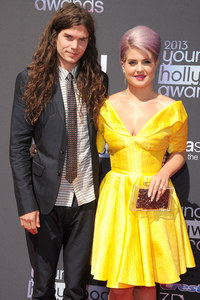 Well, at least it was an amicable break up, and apparently Kelly is going to get into the lifestyles of a singleton – join us Kelly! One of us one of us! - as her rep told People magazine: “Kelly is looking forward to a new year full of fresh beginnings.”

The pair were last seen in public together a month before this news looking happy at a charity gala in Los Angeles, and announced their engagement back in July last year, excitedly declaring the Matthew had got down on one knee the previous year but they’d kept it a secret. Hang on, celebrities keeping secrets?! Not cool!

At the time she chatted to her mum about it on Sharon Osbourne’s TV show The Talk, saying: “People know we got engaged in December of last year, but kept it a secret for six months.

She also announced on Twitter: “Thank you so much to everyone for congratulating Matthew & I! We are the happiest couple on earth right now Xoxo.”

The 29-year-old has yet to talk about the break up herself, but she did cryptically tweet: “its all about perception sometimes the bad things that happen in life aren’t really bad at all especially when you learn something from it!”

We hope you’ll be okay Kelly!

Were you surprised by this news? Tweet us @sofeminineUK