by Alison Potter Published on 28 August 2012

Kim Kardashian is known for her enviable curves and knockout style, but it seems the reality star is having some body confidence issues.

At a recent shoot, the Keeping Up With The Kardashians star tweeted a photo of her behind in a pair of tight black shiny jeans, asking: “Ummm in a fitting w @MonicaRoseStyle I think my butt looks too big in these jeans.”

And now the 31-year-old seems determined to streamline her famous lady lumps by undertaking a gruelling new fitness and exercise regime.

Kim started her Monday with a hardcore bootcamp class and then went to Pilates straight after, telling her fans on Twitter: “Early morning double workout. Bootcamp & pilates. Love starting my Monday like this!”

As well as battling with her weight, the Armenian-American reality star has the additional pressure of coming under fire for her fashion choices too. 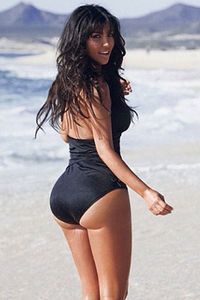 On the latest episode of Keeping Up With The Kardashians, Kim’s boyfriend Kanye West attempts to give her a fashion makeover.

The rapper turned fashion designer tells Kim he'll buy her a whole new rack of clothes if she throws her unflattering current wardrobe away.

The 35-year-old appears somewhat controlling as he gives Kim a plunging green dress and tells her: ''[You're] getting on best dressed lists now.”

Adding: ''You're stepping into this territory. You look amazing - it's a new Kim!''

Despite initially being unwilling to give up her favourite glad rags, Kim eventually agrees it’s for the best and reckons it's a “good” thing that Kanye is helping her with her style.

Personally we love Kim's style and her bootylicious rear!