Prepare to melt everyone, because Kim Kardashian has been a proud mum and brought out some snaps of her little daughter North West whilst on a talk show yesterday, and oh my goodness that baby is so SO cute! Excuse us whilst we baby talk the pictures for a few minutes! Kim also revealed that she will be having a summer wedding this year!

We all knew from sneaky pap shots and filtered Instagram snaps that Kim Kardashian and Kanye West’s daughter North West is one cute baby, but now we have some actual bona fide snaps of her and we have just about melted!

The reality TV show star appeared on the Ellen show yesterday to talk about her daughter, her fiancé rapper Kanye, and confirmed that her wedding will be this summer. Exciting times! 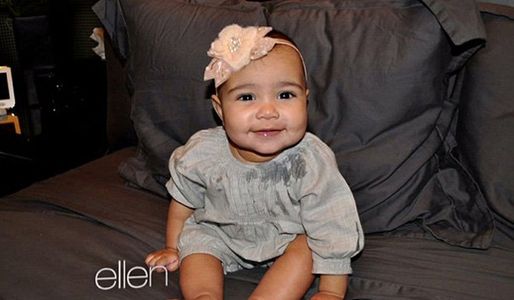 Although rumour has it that Kim was ready for baby number 2, apparently her pregnancy with North was an incredibly difficult one. She told Ellen: “after having her, I would have a million. The pregnancy – I wouldn’t really wish that upon anyone. Anyone. It’s all worth it in the end, so I would definitely suffer through that, but pregnancy was not a good experience for me. At all.

“I was literally giving birth and I looked at my mom and said: “I’m going to get you a medal. You deserve everything. My labour was easy, but just the whole pregnancy was so…I had a few medical issues, so it was really tough and I gained a lot of weight.”

Kim has been doing a stunning job ditching her pregnancy weight though, and apparently she has the Atkins diet to thank for it! It sounds like it was all worth it though when she launches into talking about her daughter.

“I had pre-eclampsia which was really tough – I had to deliver early”, Kim revealed.

“But I wouldn’t take any of it back because I have the most adorable, sweetest baby in the world. Her personality is so cute. She’s really calm and really quiet.”

The audience then went into a cuteness fit when Kim shared snaps of North laughing happily whilst clad in a grey dress with a pink hairband. Of course Kim couldn’t resist talking about accessorising her daughter. She said: “she doesn’t wear a lot of bows and my niece Penelope wears so many headbands, so I was trying all these bows on her and she really liked them, so I think she’s going to start wearing some bows.”

Although the 33-year-old is the pinnacle of glamour, she isn’t afraid to get dirty when taking care of North’s nappies, as apparently Kanye isn’t a “changing diapers kind of guy.” She said: “I love that time. I know it sounds crazy, but I love my time with her when she’s on the changing table. She tries to talk so much and I really enjoy that bonding time when I’m with her.”

Regarding the wedding, finally Kim gave us a end date in sight for the marriage to end all marriages (we’re guessing it’s going to be fairly grand.) She said “It’ll be this summer. It’ll be somewhere out of the country. We honestly haven’t picked a date yet. We said when we were on our trip skiing this New Year's that we were going to pick the date and location, and that hasn't happened. We know we want it in the summer time, but we've just got to figure that out."

Do you think North West is the cutest? Tweet us @sofeminineUK