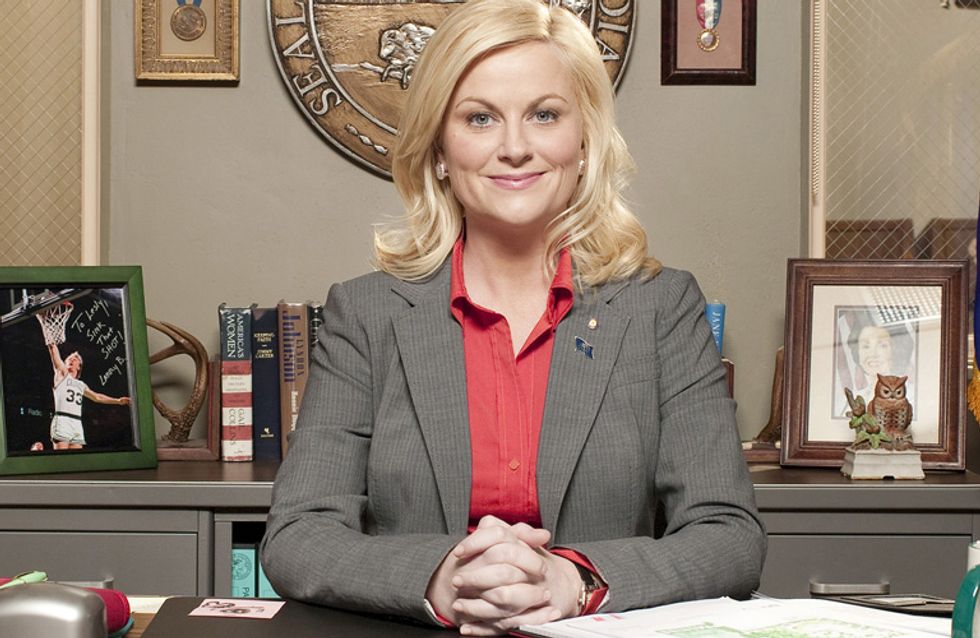 Leslie Knope is one of the greatest characters ever created. Passionate about her job, her friends and most of all, breakfast foods, she has the energy and love of life we could dream about (as we lie on our beds watching the 14th episode of Parks and Recs that day). She also happens to be a kick ass feminist, and we love her for it! Here's why...

1. When she was SO over being asked the same lame questions over and over again

As a councilwoman, Leslie has to deal with many a silly thing from the Pawnee community. However, it's only when the community begins asking her questions about her home life in comparison to her husband, Ben, that she really says what's exactly what she thinks.

2. When she taught the next generation about inspirational women

When the girls aren't allowed to join Ron's boy scouts, Leslie creates their own group and makes sure they have an amazing time, all the while learning about awesome women of the past. Can we please go to this summer camp and make feminist icon mugs?!

3. When she proved ANYTHING is possible

Women can do whatever they want to do. Leslie might be a bit ridiculous at times, but she gets it.

5. When she did not downplay her own achievements

Leslie isn't afraid to be labelled as 'bossy' or 'demanding' or 'vain' while her male peers are labelled 'in command', 'assertive' and 'self-assured'. She knows her self-worth, and it is AWESOME.

6. When she fought her corner

To be fair, she was speaking about the topless painting of her as part woman part centaur shooting an arrow, but still, what's wrong with that?!

7. When she accepted women could do whatever they want with their lives

If you want to be a stripper, be a stripper! Even if Leslie was a stripper herself, she'd still be promoting the feminist cause and we're okay with that!

8. When she and April became waste disposal people to prove that it isn't just a job for men

When the men decide that the bins would be too heavy for a woman to manage, Leslie goes above and beyond to prove them wrong and get some women in the industry (let's face it, April just went along so she could spy in people's rubbish).

9. When she didn't falter in praising her fellow woman

Although Leslie loves and supports her husband Ben, it is frequently mentioned that Leslie truly, madly, deeply loves her best friend Anne Perkins and supports her through everything she does - from having a baby to moving away.

10. When she constantly supported everyone (including herself)

Sometimes you just need a pep talk and Leslie was never afraid to show it.

11. When she SHUT DOWN certain assumptions

Ain't nobody got time for this NONSENSE.

12. When she was ready to shut down haters

Leslie never backs down when she knows her opinion is right and fair (and then some). Her opinion on feminism is therefore unshakeable.

13. When she said this absolute gem about how women should live

Doesn't this really sum feminism up? Do what you choose to do and don't judge anyone else for their decisions. This right here is why we LOVE this character!