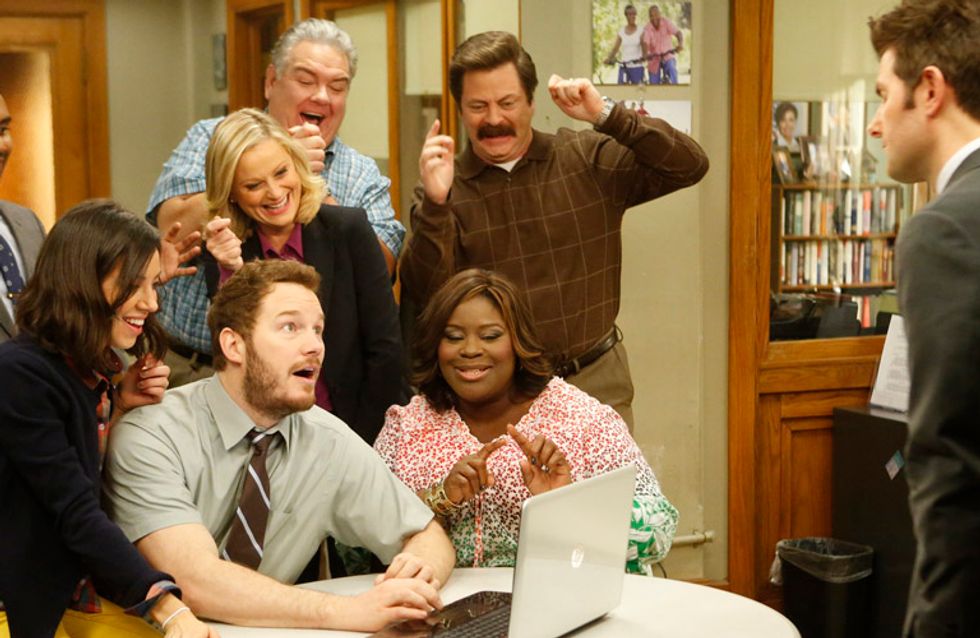 It can be a problem when you and your SO are into completely different television. Maybe you like action and he likes horror, or you would love to settle down with a silly teen drama where he would watch that stuff OVER HIS DEAD BODY. Fortunately there are some shows out there that you can both love. Here are our top 10 faves...

1. Orange is the New Black

Trust us, the hilarity and drama that surrounds the women of Lichfield prison will NOT get lost on the man in your life, especially when this show is NO walk in the park and filled with corruption, drugs, and a pretty healthy helping of violence!

A fantastic mockumentary comedy much like The Office, except the David Brent of the piece is the dopey yet entirely loveable Leslie Knope, and enthusiastic and perky politician who works in the Parks and Recreations department and is entirely too optimistic 100% of the time. We love her, and we already know who your SO is going to love. Ladies and gents, meet the stoic, moustache twitching legend of the piece: Ron Swanson.

This fly-on-the-wall show is the perfect portrayal of typical lives with truly hilarious comedy thrown in for good measure. This isn't a show for just guys or girls. It's for anyone who has been in a crappy job, loved someone who doesn't love you back, or just had a really, REALLY annoying colleague.

If you or your partner scare easily, this is definitely one to snuggle up and hide in each other's PJs to. Also, it is GRIPPING. Get ready to be screaming at each other at the end of each episode from the sheer OMG of it all.

There is NO WAY you can watch this and not find a character you don't like or relate to. Tomboys, girly girls, sarcastic book lovers, fighters, manipulative political brothel owners: THERE IS SOMEONE FOR EVERYONE. It helps that the storyline is also totally awesome and there's a whole bunch of sex in it as well. You will enjoy it, promise.

Superhero movies are also considered to be kind of aimed at a male audience, but we absolutely do NOT think this is the case. Girls can be just as much into the Marvel madness as men, and with Daredevil it's a chance for you both to start off on the first season without 'did you know?' or 'I love this next bit' moments of annoyance.

The love for the show about a chemistry teacher who finds out he has terminal cancer and turns to cooking crystal meth to provide for his family is universally loved. It's as simple as that. You literally cannot not love it.

This show is SO trippy as the coming-of-age tale where quiet and thoughtful teenager Norman Bates slowly becomes 'psycho'. The dodgy relationships, hot characters and let's not forget the GORE will have the pair of you obsessed.

A hilariously absurd comedy in which Kimmy, a girl who has been held captive in a bunker, convinced of a nuclear apocalypse, is reintroduced to the outside world, quickly making BFFs with her new housemate Tituss and their landlady, Lillian. The theme song will become your song, so start planning your first dance to it's upbeat tempo!

Firefly is solid proof that a TV show can bring people together, and you and your partner will be no different. You can laugh at the comedy, cry at the tragedy, marvel over the whole western-in-space super-genre, and you can similarly recoil in HORROR at the fact that Fox cancelled the critically acclaimed show after only one season. If the rage doesn't strengthen your relationship, nothing will.

What do you watch religiously with your partner? Tweet us @sofeminineUK!

This Disney 90s Supercut Trailer Will Give You ALL The Feels