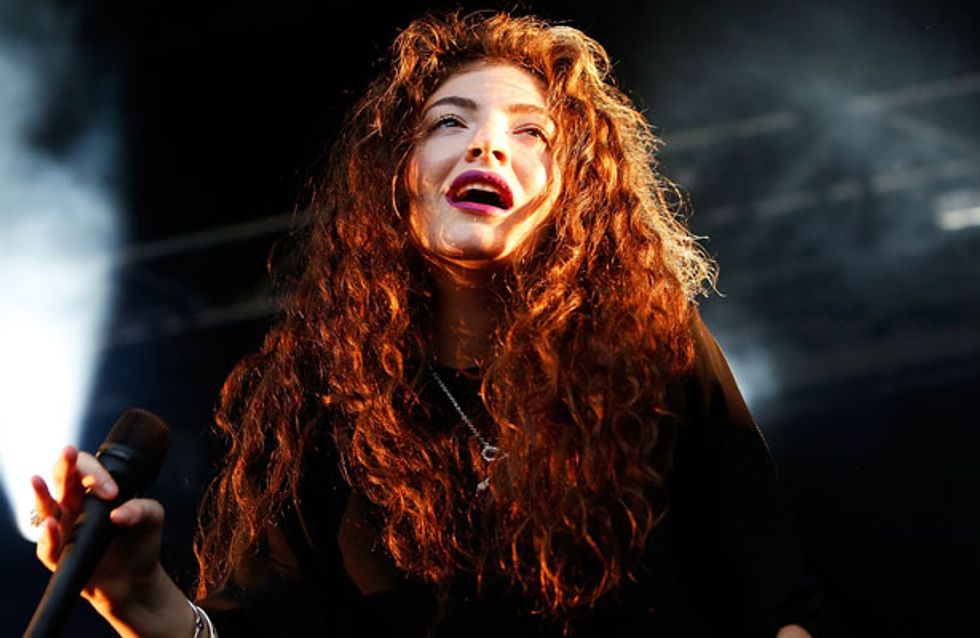 We can't help but love it when celebs step outside their media-trained personas to stand up for themselves. Quite honestly, we live for it. When an Australian shock jock interviewed teen sensation Lorde for the The Kyle & Jackie Show, he made a few remarks she neither found funny, nor remotely entertaining. Her response was so perfect, she's now becoming one of our favourite people...ever.

It comes as little surprise interviewers try their best to get a memorable quote from everyone they interview. We mean, it is a part of their job. However, there are times when even if you are a shock jock, you can overstep your boundaries. Such was the case when a radio host from Australia's KIIS 1065 decided to make a few remarks Lorde didn't take to too kindly.

When one of the hosts of The Kyle & Jackie Show asked the "Royals" singer about her growing friendship with Taylor Swift, things got a little weird. "I see your guys' pictures everywhere. Are you guys, like, together now?" he probed. While she was clearly unamused, he went further, "Not together as in lesbians…I'm not talking about 'Ellen together.' I'm talking about, like, you guys are friendly, right?" Umm, ok?

What happened next had us cheering from behind our computer screens. Lorde responded with, "What do you mean you're not talking about 'Ellen together?' Is there something wrong with lesbians? Is that what you're trying to say?" Of course he immediately backtracked.

Lorde's epic retort got us to thinking about our favorite celebrity snap backs of all time. Let's just say we really love when they stand up for themselves.

Back in 2012, when Rihanna first debuted her pixie cut, it had everyone talking. Some loved it, while others hated it. Piers Morgan fell into the latter group, and decided to voice his opinion on the singer's chopped tresses via Twitter. Never one to take a diss sitting down, Rihanna quickly offered up a response. We won't lie, we were LOLing for a while.

Before the birth of baby their daughter, many people speculated Kim and Kanye would have their offspring carry on her family's "K" name tradition (very apropos considering their own monikers). When it was revealed the couple named her North West, the media had a field day. Katie Couric went as far as sending the famous couple a gift with the above note. Kim captioned the photo, "#IHateFakeMediaFriends #MayIHumblySuggestYouNotSendGiftsThenTalkShit." She clearly did not approve.

Mia Farrow vs. The Golden Globes

A woman has publicly detailed Woody Allen's molestation of her at age 7. GoldenGlobe tribute showed contempt for her & all abuse survivors

Time to grab some icecream & switch over to #GIRLS

When the 71st Annual Golden Globes decided to pay tribute to legendary filmmaker Woody Allen, his ex wife Mia Farrow was downright appalled. She couldn't understand why a man who had been accused of sexual abuse was being publicly lauded. So what did she do? Turn to her favorite HBO show, Girls, of course.

When Kanye West gave an infamous interview with BBC Radio's Zane Lowe, Jimmy Kimmel couldn't help but poke fun at the rapper. Kanye wasn't too fond of Kimmel's spoof, and shared his own thoughts about the comedian on Twitter.

That quote people MADE UP about Beyonce just made me lol! Imagine if I said I got "the looks and the curves I'm just better!" Bahahahhaha

When a false quote began circulating the web claiming Miley Cyrus took a few jabs at Queen Bey, the young singer quickly made sure to clear the air. Seriously, who could ever not like Beyoncé?

When a Dutch magazine Jackie referred to Rihanna as a 'n*gga b*tch' in one of their articles, she was rightfully offended. RiRi contacted the glossy's editor-in-chief on Twitter saying, "I hope u can read english, because your magazine is a poor representation of the evolution of human rights! I find you disrespectful, and rather desperate!! You ran out of legit, civilized information to print! There are 1000's of Dutch girls who would love to be recognized for their contributions to your country, you could have given them an article. Instead, u paid to print one degrading an entire race!"

We couldn't have said it any better.

As if being a female in the industry isn't hard enough, the media often tries to turn women against each other. When Complex magazine asked Bey about her rivals, she responds, "There is room on this earth for many queens. I have an authentic, God-given talent, drive, and longevity that will always separate me from everyone else. I’ve been fortunate to accomplish things that the younger generation of queens dream of accomplishing. I have no desire for anyone else’s throne. I am very comfortable in the throne I’ve been building for the past 15 years.”

The Critics vs Designers war is heating up. Today, Oscar de la Renta wrote this open letter to Cathy Horyn in WWD: pic.twitter.com/uNXYdQqz

New York Times fashion critic Cathy Horyn is infamous for honest, and sometimes harsh reviews. In September of 2012, Oscar de la Renta had had enough, and decided to pen an open letter to the writer.

What are some of your favorite celebrity snap backs of all time? Tweet us @sofeminineUK!