by Alison Potter Published on 21 January 2013

Michelle Keegan has followed in the footsteps of Anne Hathaway and accidentally exposed her nether regions after her thigh-high split rode up too far.

The Coronation Street actress was luckily wearing beige underwear - unlike the Les Mis star - although she dashed any hope of making a glamorous entrance at her new beau’s birthday party with the X-rated flash.

Mark was celebrating his 26th birthday at Jalouse nightclub in central London and it marked the smitten pair's public debut as a couple.

The duo held each other’s hands tightly as they made their way into the exclusive Mayfair club, although the 25-year-old actress definitely looked worse for wear by the end of the night as she piled into a taxi with Mark and his friends.

The soap star and Take Me Out: The Gossip presenter first sparked romance rumours with a New Year's Eve kiss at an event in Dubai. 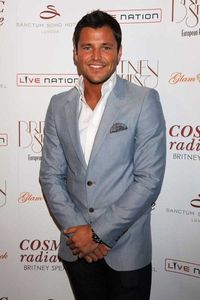 Since returning to the UK, they’ve been taking turns to visit each other in their respective homes in Essex and Manchester.

Luckily it looks like Michelle has earned the seal of approval from all of Mark’s friends, including his BFF and former TOWIE co-star James ‘Arg’ Argent.

He told the Sunday Mirror at the weekend: “I honestly reckon they are going to get married. They are just so well suited.

“The perfect match. They are one hot couple and will have beautiful babies.

“Marchelle is their new name. I really approve of Michelle and haven’t seen Mark so happy before. It will last a long time.”

This is Michelle's first romance since she split from her former fiancé - The Wanted's Max George - in August after 18 months together.

Similarly Mark was engaged to TOWIE star Lauren Goodger and has been single since splitting with her in August the previous year.