Everything That Happened At The Oscars 2017

Another year, another overtly lavish Oscars ceremony. La La Land triumphed, Nicole Kidman awkwardly clapped and there were A LOT of tears, but what else went down? Here we reveal all you need to know including the winners and THAT monumental f*ck up...

After sweeping the BAFTAs and making history at the Golden Globes, it looked like the road to victory was well and truly paved for musical La La Land. And just as predicted, it didn't go home empty handed. But, although it won six awards in total (including Best Director, Best Cinematography and Best Actress), it failed to win each of the 12 categories it was nominated for.

There were many gasp worthy moments, but the one that really left us watching through our fingers was when La La Land was incorrectly announced as the winner for Best Film, only for a couple of minutes later for it to be revealed there had been an error and it was in fact Moonlight who had won. Eek, talk about awkward! It was a twist of events more typical of a screenplay by Chazelle than the most important awards ceremony in Hollywood.

But it wasn't just La La Land and Moonlight who slayed, oh no, Fences, Hacksaw Ridge, Manchester By The Sea and Zootropolis also made their mark. 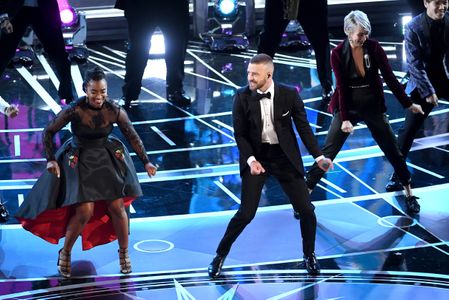 And here's the best of the rest!

Before reviewing everything that happened in the gala, let's first take a moment to appreciate the best sartorial efforts on the red carpet. These ladies looked incredible and deserve to take home a statuette for their gowns alone!

If there was an Oscar for best photobomb, there would be no winner more worthy than Justin Timberlake who took it to the next level, crashing this interview with Emma Stone in the most hilarious way possible.

The dishy singer had everyone inside and out of the Dolby Theatre grooving as he opened the show singing his catchy Trolls soundtrack Can't Stop The Feeling, making us fall in love with him all over again.

Jimmy Kimmel, AKA master of ceremonies, presented the show announcing "This gala is seen in 250 countries around the world that hate us right now," referencing Donald Trump, before introducing the first award of the night for Best Supporting Actor. The gong went to Mahershala Ali for his role in Moonlight. We predict great things ahead for this talented actor.

One of the most anticipated awards of the night was for Best Supporting Actress, and it seemed clear that Viola Davis would take the gong after her amazing performance in Fences, so we were not surprised when she triumphed. Her speeches are often inspiring and emotional, and this year was no different, making it the best of the night.

She said: "People ask me all the time, what kind of stories do you want to tell, Viola? And I say, exhume those bodies, exhume those stories, the stories of the people who dreamed. I became an artist, and thank god I did, because we are the only profession that celebrates what it means to live a life, so here's to August Wilson, who exhumed and exalted the ordinary people. " Of course she was overjoyed for her third nomination and her excitement was clear as she collected the Oscar. Host Jimmy Kimmel wasn't wrong when he joked "Viola Davis an Emmy nominated just for that speech." Slay!

We need to take a moment to appreciate Emma Stone rehearsing how to lift her Oscar, which just further confirmed how much we love her tbh. What a hero.

The second Oscar that La La Land scooped was for Best Photography and we got to catch another glimpse or Ryan Gosling so we feel like winners too. Naturally.

John Legend singing his hit City of Stars from La La Land was without a doubt a stand out moment. His daughter Luna is one lucky kid to get lullabies every night that's for sure! This performance set the tone perfectly for the next award for Best Soundtrack to be announced, and it was no surprise that La La Land snagged it. The musical ALSO won best song for City Of Stars... talk about sweeping the floor.

Amy Adams, who was shunned in the awards category, looked gorgeous presenting the Oscar for Best Adapted Screenplay, which went to Moonlight.

One of the most prestigious awards for Best Director went to Damien Chazelle for La La Land. Not only did he scoop the award, but he also made history by winning it at age 32 and becoming the youngest director ever to win. Kudos

The final straight continued with the award for Best Actor. There was no clear winner for this award as all nominees in the category, including Ryan Gosling and Denzel Washington, were well deserving for their starring roles. Brie Larson took to the podium to present the award, which went to Casey Affleck. He accepted his prize, and thanked his famous brother in his sweet acceptance speech: "This year has been crazy and I feel proud to feel included in your community," he said referring to Hollywood. "Ben, I love you." Cute!

Despite being up against stiff competition from the likes of Natalie Portman and Meryl Streep, Emma Stone won the sixth prize for La La Land, for Best Actress. Emma was clearly completely overjoyed and her speech and made us all kinds of emosh.

​"Being with you in this category has been an honour, the greatest of all," she said of her nomination partners. "Ryan Gosling, thank you for making me laugh, for having the high bar and for being the best partner, I still have a lot ahead, this is a good symbol to continue my journey," Are these two the new Leo DiCaprio and Kate Winslet of Hollywood? We. Can't. Even.

But after all the excitement of the awards, came the mother of all face palm moments. In an error that can only be described as historic, after the cast and producers thanked all those responsible for La La Land, their speech was interrupted as the Academy rectified that Moonlight had in fact won the prize, after a little case of, ahem, the wrong envelope. AWKS!

So there we have it friends. Although La La Land were the big winners, with twelve nominations to its name it didn't do quite as well as expected. On the other hand Moonlight actually did much better than expected, winning Best Supporting Actor, Best Adapted Screenplay and Best Picture. The other two stand out flicks from the night were Manchester by the Sea, taking home Best Original Screenplay and Best Actor, and Hacksaw Ridge, which saw wins for Best Sound Mixing and Best Film Editing.

Bravo! If anyone needs me I'll just be here listening to City of Stars on repeat...

We Found Out What's In The Oscars Goody Bags

Throwback To All The Dreamy Looks of The Oscars 2016

Rose Adams
…
For all the best videos, memes and shareable news!