Yes! YES! Mila Kunis and Ashton Kutcher are reportedly engaged, and we couldn’t be more excited! The Ted star was seen sporting a huge engagement ring whilst out shopping, appearing to confirm that the Two and a Half Men star Ashton got down on one knee.

Mila Kunis has been seen flashing a huge diamond ring, seemingly confirming the engagement that we have all been hoping for with Ashton Kutcher!

The 30-year-old was cheerfully shopping at The Grove outdoor mall with her mother (for Mother of the Bride hats, perhaps?) as we caught a glimpse of the simple but huge stone fixed onto her ring finger.

Ashton and Mila have been dating for two years now, even though they have been friends for years before then having appeared on That ‘70s Show from 1998-2006 together.

The Black Swan actress also shared an Instagram snap a couple of days ago of the pair cheekily smiling with the caption: “I love you @kutcher78@. Naw! 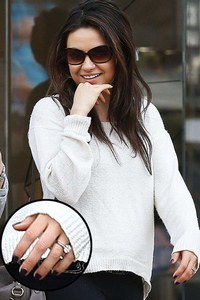 Their relationship does sound amazing, as a source recently told People magazine: “Ashton loves to travel and so does Mila, so they have seen a lot of new places and both are charged at the idea of doing it more, even living part-time abroad.

“They seem to have a lot in common, and that helps keep a relationship strong.”

The source continued that Ashton and Mila: “have talked about getting married for quite a while.”

Ashton only just finalised his divorce with his first wife Demi Moore back in November, even though the pair had split back in 2011, but it looks like he couldn’t wait to get down on one knee to Mila!

It does sound like the Forgetting Sarah Marshall actress in head over heels in love with Ashton, and told Cosmopolitan magazine: “We have a thing called white T-shirt night and it’s when you wear jeans and a white T-shirt and you go on a date.

“Nothing fancy, it’s just something that you love to do. And whether that’s bowling or dinner or going to a cheese shop and have some wine or walking about.”

They are just adorable! Do you think they’ll get hitched soon? Tweet us @sofeminineUK