by the editorial team Published on 24 February 2014 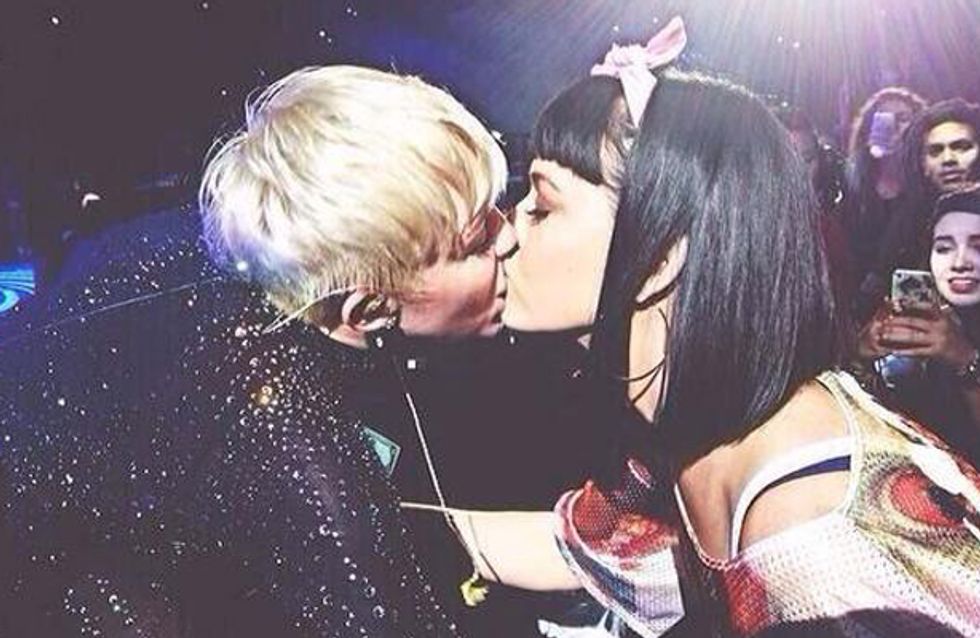 Miley Cyrus’ Bangerz concert in Los Angeles was definitely a hit, with celebrities like Kendall Jenner, Khloe Kardashian and Hilary Duff in attendance. But one celeb got some up close and personal time with Miley. Katy Perry and Miley locked lips in front of thousands upon thousands of fans, and a few even caught it on camera!

At Miley Cyrus’ recent Los Angeles Bangerz concert, she and fellow singer Katy Perry stole a smooch, in front of all their adoring fans. Well, one of Katy Perry’s breakout hits was “I Kissed a Girl” after all!

Miley was on stage, performing her hit song “Adore You” when she bent down and gave her gal pal a kiss full on the lips. After the moment ended, Miley told everyone, “I just kissed a girl and I really liked it a lot,” echoing Katy’s smash hit 2008 song.

Katy was clearly excited for the performance, tweeting before the show, “I hope @MileyCyrus sings Breakout or The Climb tonight please bb!”

She certainly got more than she bargained for, but both she and her friend Miley have laughed off the cute kiss on social media. After their smooch, Katy tweeted an adorable candid picture, with Miley open-mouthed and Katy covering her mouth with her hand.

And after! I adore you @MileyCyrus 👅 pic.twitter.com/xGU0UPna1S

After the show, Miley chimed in on Twitter, adding a photo of the two hit singers locking lips.

Katy wasn’t the only celeb in attendance Saturday night. Kendall Jenner and sister Khloe Kardashian were in the audience, along with actresses Hilary Duff, Sarah Paulson and Diane Keaton.

After a kiss like that between friends, should Katy's boyfriend John Mayer be worried? Probably not! Katy was spotted sporting quite a rock on her left hand ring finger on Valentine's Day, and fans everywhere are desperately hoping for engagement news soon. Maybe?

What do you think of Katy and Miley’s special moment? Tweet us @sofeminineUK!