by Stephanie Ashley Published on 17 December 2013 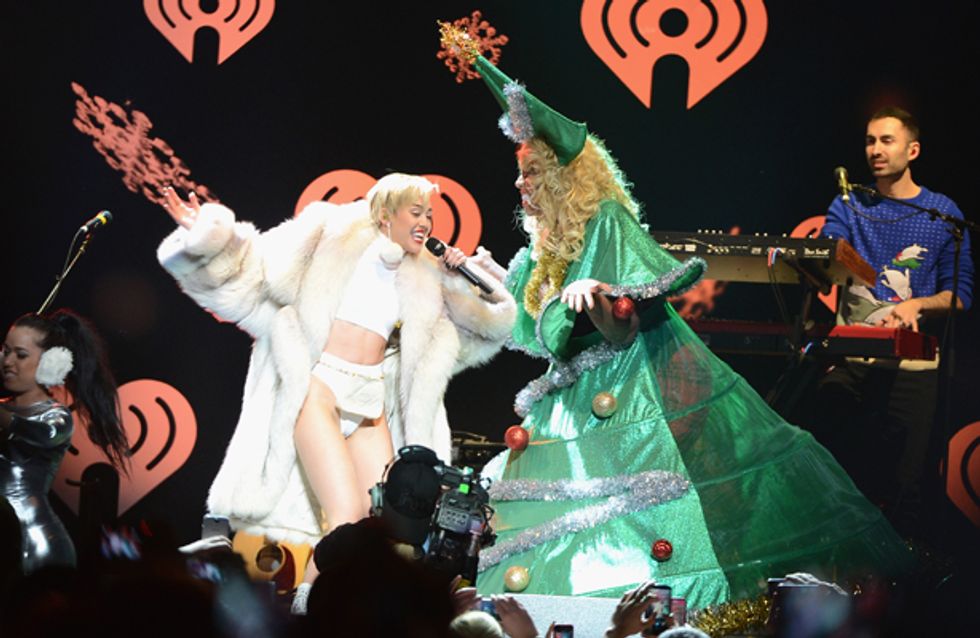 Miley Cyrus has combined her love for all things skimpy, boozy and twerky, with a whole lot of holiday cheer. Last night, the singer performed in her signature, scantily clad, awesomely crazy fashion at the Hot 99.5’s Jingle Ball 2013 in Washington, D.C., and apparently, the staged performance was only half the fun.

You think you’ve seen it all, and then Miley strikes again! Her latest act of Miley-themed craziness came at the Hot 99.5 Jingle Ball 2013 in Washington, D.C.

It seemed to be an ordinary, or as ordinary as Miley Cyrus is lately, Miley performance. She arrived on stage wearing white underwear that can barely be called hot shorts, white cowboy boots, and a white crop top with festive green reindeer antlers on her head.

Of course, a dwarf wearing a silver bodysuit with a built-in cone bra, a Santa Claus and a giant Christmas tree, all came on stage for Miley to dance with, and for one song, the Wrecking Ball singer even covered up in a large, furry winter coat. Scandalous!

The performance was certainly entertaining, and nothing we haven’t come to expect from the pop wild child. But it looks like the real party started after the Jingle Ball.

Miley recently told Barbara Walters in an interview that, now that she’s single, “I just feel like I can actually be happy.” Well, it certainly seems like she’s having a blast.

The singer took to Twitter after her performance, posting pictures of her with what looks to be a Santa from her performance. She also sent out tweets to say, “Santa got to turnt tonight,” “DC rocked,” and “I stole someone’s antlers tonight.”

Way to get into the holiday spirit. All the Twitter madness culminated in one of the weirdest, booziest, and greatest Christmas cards to ever be created.

In it, she is passed out on top of the same Santa posted in her other pictures. Around them are cartoons of what look like a snowball losing his lunch, a rabbit getting beaten up by a teddy bear, and a blonde guy passed out in drool, all with snowflakes falling around them.

Well, Miley, you have succeeded in having a blast, partying it up, and revelling in the holidays, all while giving Twitter followers an image they can never un-see, and perhaps don’t want to!

What do you think of Miley’s crazy Christmas card? Tweet us @sofeminineUK.