Most Epic Moments From Game of Thrones Season 4 Episode 9: Watchers on the Wall

by Emmy Griffiths Published on 9 June 2014 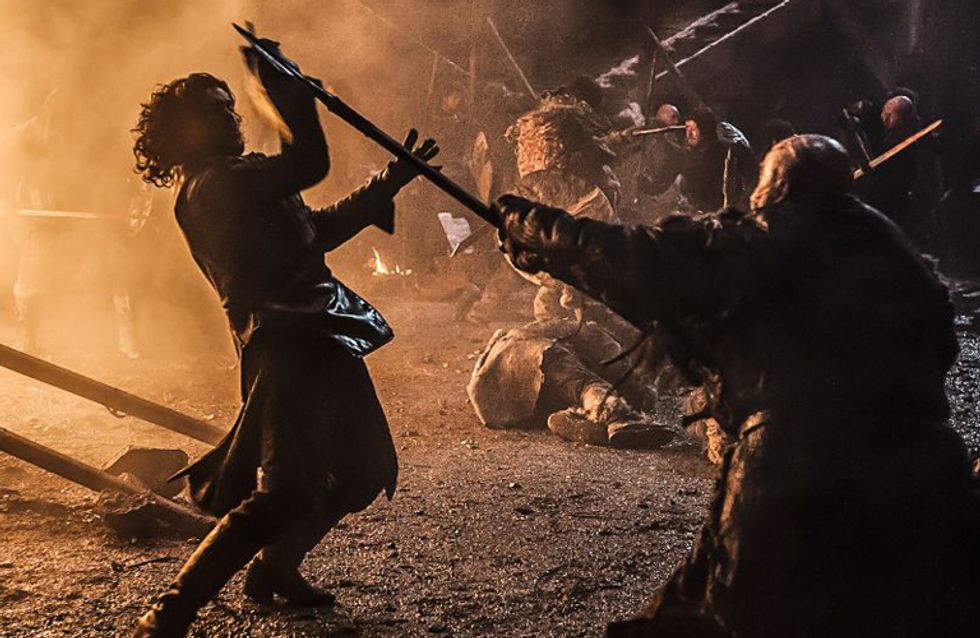 Season 4 episode 9 was the show's second huge battle sequence, and it did NOT disappoint. The moderately sad death count was the price to pay for such an unbelievably EPIC episode. We still have our fingernail marks on our faces from just the OHMYGODDONTKILLJON-ness of it all. So what were the best moments from Watchers on the Wall?

Jon Snow might be a beautiful yet beleaguered grumpybum who wouldn’t know a smile if it hit him with a Wilding Giant’s massive arrow, but dammit he’s watchable, isn’t he?

From taking charge of The Wall, fighting the sh*t out of that Thenn and sticking hammers into Wildling skulls, our love for the grumpiest of the Stark bunch just went up.

#GoT Lessons of the week: •They should have stayed in that cave •Jon Snow still knows nothing •This show doesn't care about your "feelings"

Alliser has been a total sour Crow up until now, but as the conflicted Commander of the Wall during this battle, he was perfect.

Speaking of which, from the fiery arrows to the boiling oil to the Giants and their pet Mammoths storming the gates, the whole battle was one intense nightmare to watch. We’re still recovering. It was even better than the Battle of Blackwater Bay. Yeah we said it.

Game of Thrones does that a lot. Ser Alliser Thorne last night...I mean, we all hate that guy. But suddenly you understand him.

You can say anything you want about Alliser Thorne, but there's no denying the existence of his balls. #GameOfThrones

"I made a promise to defend the Wall and I have to keep it. Because that's what men do."

Ok, did Samwell just become a total BAMF? Can we pinpoint the moment when that happened?!

“Love is the death of duty” – Maester Aemon

Ygritte was so ready to shoot the sh*t out Jon Snow before she saw him. Instead, the pair went all googly eyes for a split second and Ygritte ended up with an arrow through her chest. It wasn't exactly surprising, but we're still not best pleased about this.

Just saying, but this is what happens when you let love take over duty in GoT, just ask Ned, Robb, Catelyn, Oberyn (I could go on). Why haven’t you people learned?!

Still, sad to see Ygritte go. She was so much better than all of us.

Why does Game of Thrones play with my emotions like this 😭

Bye Ygritte. You were my favorite ginger.

That boy who shot Ygritte thru the heart reminded Jon Snow of the most golden rule in the Night's Watch: Crows before Hoes #GoT

So now Jon is off to see Mance Rayder and possibly kill him even though he’s left his little wolfy sword behind and is basically empty-handed? Yeah great plan. Though to be fair on him, no one really has anything better to offer.

Can we just call it as we see it and say The Night’s Watch is kind of sh*t?!

I am attached to nobody in GOT as much as Jon Snow. If he dies, I die. Jon Snow is life.

Grenn has gone a long way from starting on Jon back in season 1. Ordered by Jon to guard the gate, his yelled oath as the Giant ran towards them was probably the BEST moment in the whole episode. And now his watch has ended. Sniff.

I was fine with ygrittes death but pyp and grenn 😡😡

anyway, rest in peace, Grenn & Pyp. worry not, you guys will live on in our hearts. and in the books, actually.

“I need him more than I need you.”

We suspect the only reason they brought Ghost out is so we could all cheer out loud at our television sets. The Game of Thrones screenwriters are usually so bleak that they have to give us something to cheer us up from time to time. We say this because as much as we love Ghost, all he did was kill one Wilding in that fight then settle in for wolfy dinner.

Ghost is like the Lassie of Game of Thrones. #GoT

HOW are we at the end of season 4 already?! Either way, it looks like the last episode is about to send Tyrion to the chopping block (erm, NOOOOO), as Jon Snow goes on his death quest to Mance Rayder. Then we’re back to mundane normality for another year. BOO.

1. Is Jon Snow going to be the next main character to bite the dust?

2. How do you plan on mourning poor old Ygritte?

3. Is Gilly going to just become a man of the Night’s Watch now then?

4. What did you love more – the pan-round of the entire battle, the giant getting into that gate, or Ghost being unleashed on the world?