Nicole Kidman got a lot off her chest in a recent interview with Vanity Fair. The actress revealed that her failed marriage to Tom Cruise was very much like Brad and Angelina’s incredibly high profile relationship. With all the constant media scrutiny and the intense pressure of being in the spotlight, the Aussie actress explained that it only served to bring the pair closer together.

In the December issue of Vanity Fair, Nicole Kidman suggested one power couple that would understand the pressures she faced in her first marriage.

The actress candidly reveals her marriage to Tom Cruise was very similar to our shining couple today - Brad Pitt and Angelina Jolie.

"There is something about that sort of existence that, if you really focus on each other and you're in that bubble, it's very intoxicating, because it's just the two of you."

"And there is only one other person that’s going through it...

"So it brings you very close, and it's deeply romantic. I'm sure Brad and Angelina have that--because there's nobody else that understands it except that person who's sleeping right next to you.”

Now the 46-year-old admits that she feels as though she’s finally found her “great love” in second husband and country singing sensation Keith Urban, with whom she has two children, 5-year-old Sunday Rose and Faith Margaret, 3.

“I was so young.” she recalls of her first marriage to Tom.

The Grace of Monaco star was only 23 when she wed the Mission Impossible star so it was evident at the time that she nor Tom were really ready to settle.

She said: "With no disrespect to what I had with Tom, I've met my great love now...

"And I really did not know if that was going to happen. I wanted it, but I didn't want it for a while, because I didn’t want to jump from one relationship to another.

“I had a lot of time alone, which was really, really good, because I was a child, really, when I got married [to Cruise]. And I needed to grow up."

The Aussie beauty also revealed that she was on such a “low” that she could even relate to suicidal Author Virginia Woolf who she played in the 2002 drama movie Hours.

She said: "At the time, I was at a low point, and by playing her, it put me into a place of appreciating life."

Though Nicole still owns a house in LA she’s not missing the glitz and glamour of Hollywood.

"There’s an enormous amount you have to give up if you want to have a family. You can have a certain career, but you can’t be living in Hollywood, [where] absolutely everything, everything revolves around it.

"That wasn’t my choice. I’d rather revolve around somebody else’s career and then still find my own."

It's good to know the media wasn't to blame for their split as is the case in many celebrity breakups today. Stepping away from fame, Nicole seems content with where she is in her life and we couldn't be more happy for her!

But what do you think about her comparison with Brad and Ange? Is it a fair comparison? Tweet us @SofeminineUK. 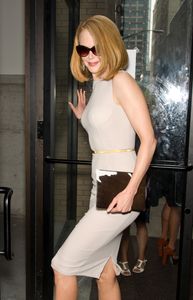