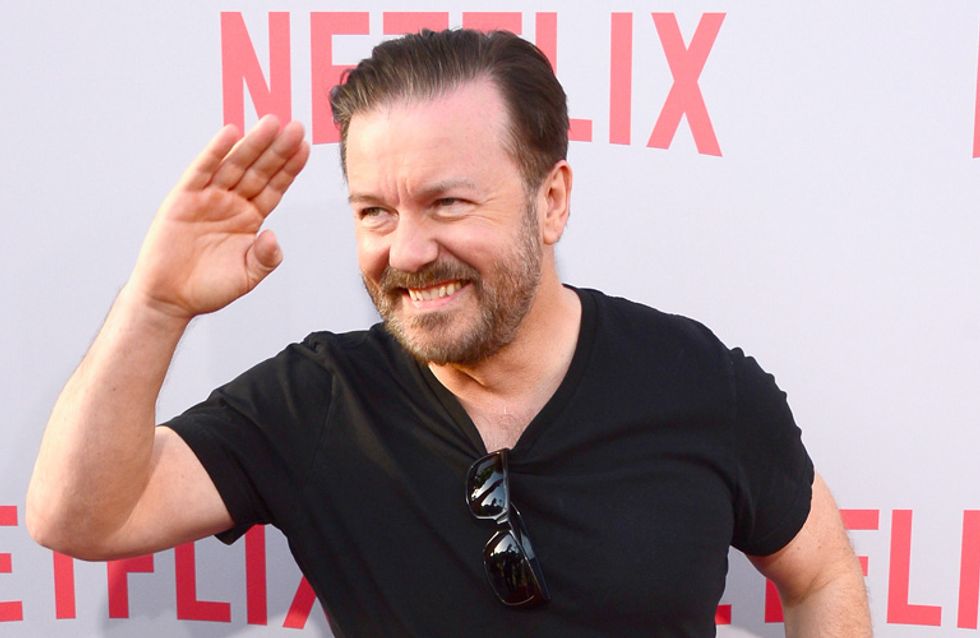 Ricky Gervais has always been a strong advocate for animal rights, and has previously spoken out about issues including against black bear fur used as hats for the Queen's Guard, fox hunting and bullfighting. This time, the comedian is speaking out against trophy hunters and has sparked a huge debate online over those who kill for sport (and to be frank, he is winning)...

It began when Gervais posted pictures of hunters posing next to dead giraffes:

What must've happened to you in your life to make you want to kill a beautiful animal & then lie next to it smiling? pic.twitter.com/DyYw1T5ck2

The hunter in the second photo is Rebecca Francis, who gave a statement to Huntinglife.com following Gervais's tweet. She said: "When I was in Africa five years ago I was of the mindset that I would never shoot a giraffe. I was approached toward the end of my hunt with a unique circumstance. They showed me this beautiful old bull giraffe that was wandering all alone. He had been kicked out of the herd by a younger and stronger bull. He was past his breeding years and very close to death.

"They asked me if I would preserve this giraffe by providing all the locals with food and other means of survival. He was inevitably going to die soon and he could either be wasted or utilised by the local people. I chose to honour his life by providing others with his uses and I do not regret it for one second.

Once he was down there were people waiting to take his meat. They also took his tail to make jewellery, his bones to make other things, and did not waste a single part of him. I am grateful to be a part of something so good.

Gervais responded to her statement with a few pretty brilliant thoughts of his own...

After killing that giraffe out of the kindness of her heart and feeding the poor locals she had these for pudding. pic.twitter.com/P3nP4ACDKI

This Tofu & Rice was old and sad and wanted me to kill it. Now I will eat it. pic.twitter.com/5vsstpUZaL

You don't use a bow & arrow and then take a smiling selfie in a mercy killing. She wanted to murder a giraffe & she did. Fuck the bullshit.

According to The Independent, Francis then accused Gervais of sexism, saying Gervais: “used his power and influence to specifically target women in the hunting industry and has sparked thousands of people to call for my death, the death of my family and many other women who hunt”.

Fortunately, Gervais did not back down after claims of sexism, saying:

We need to stamp out this terrible sexism in the noble sport of trophy hunting. The men & women that do it are EQUALLY vile & worthless.

"I kill lions, giraffes & bears with guns & bows and arrows then pose grinning. Why don't people like me? Must be because they're sexist"

Sport is fair. Sport is consensual. If Trophy Hunting was a sport the animal would know it was involved. It would also shoot back. Cowards.

What do you think about this important issue? Tweet at us! @sofeminineUK

10 Ingenious Signs To Take To A Marathon

Absolutely bonkers
by the editorial team