WATCH: Robert Downey Jr Walks Out Of An Interview Like An Absolute Champ 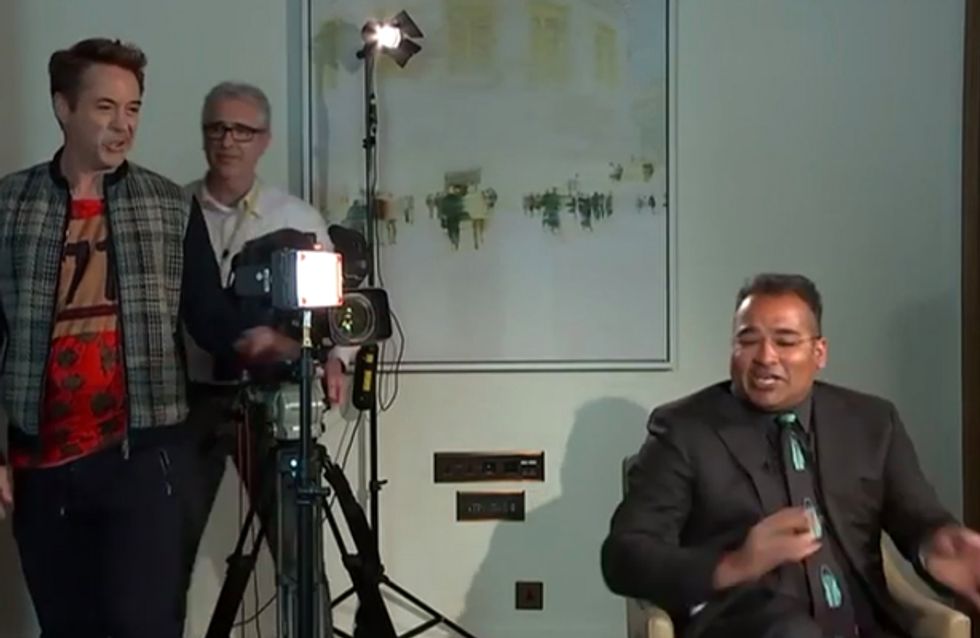 We all know that Robert Downey Jr has a rocky past. After struggling with drug addiction, alcoholism and that one stint in prison, it's fair to say that Hollywood's highest paid actor has turned his life around in a BIG way. So when Channel 4 journalist Krishnan Guru-Murthy interviewed him for Avengers: Age of Ultron, it's fair to say RDJ did NOT appreciate the counselling session...

The interview started off well enough. RDJ answered Krishnan Guru-Murthy's questions about being a fan of superheroes growing up, Age of Ultron and about his own character Tony Stark. However, when the Channel 4 reporter began questioning him about his murky past, that was about the time Robert's expression became this:

Drawing parallels with Tony Stark's character arc (also known as grasping at straws), Krishnan said: "But he's becoming a much more likeable person...a better man...in a way that you are as well I suppose."

Somehow avoiding to cringe like everyone else who has since watched this interview, Robert simply replied: "sure", then laughed awkwardly because the whole thing was SO AWKWARD.

After quoting an old interview where Robert Downey Jr described himself as a liberal, the actor asked: "are we promoting an action movie?"

You'd think the interviewer would get the hint, and start asking about pranks on set, right? WRONG.

Putting his foot directly into his mouth, Krishnan continued: "You say we're promoting a movie...but we would also like to talk a little about you...the reason I'm asking about the past is that you've talked in other interviews about your relationship with your father and the role of all of that in, you know, the dark periods you entered taking drugs and drinking and all of that and I just wondered whether you think you're free of all of that?"

Finally Robert asks: "what are we doing?" before saying a quick "bye!" and leaving.

Taking off his microphone, he said: "You're okay, but it's like getting a little Diane Sawyer in here."

As much as we respect Krishnan Guru-Murthy and still like to chuckle at his equally awkward interview with Quentin Tarantino who infamously told him he was "shutting [his] butt down", we have to say KNOW WHEN TO STOP! Check out the entire, cringe-worthy interview here:

25 Of The Best True Detective Memes On The Internet