Well it looks like Robert Pattinson and Kristen Stewart will not be snuggling up with mulled wine by the fire this year, with the view of London in the snow spread out beneath them, since apparently their Christmas plans have been called off. Rumour has it that Kristen would be joining Rob in the UK after he flew home a couple of weeks ago, but it looks like the Twilight star has decided against it and will be staying in the US over the holiday period.

Kristen Stewart is no longer going to be spending Christmas Day with Robert Pattinson, and we have to admit that we're a bit disappointed about it.
​
Rumour was that Kristen would be spending the merriest day of the year in London with her ex-boyfriend after the two had been seen out and about together since breaking up back in May, and if not Christmas, she would at least be spending Boxing Day with him in Paris. 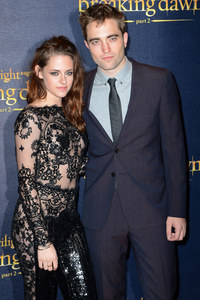 A source revealed to HollywoodLife: “Rob reached out to Kristen to congratulate her for Camp X-Ray being selected for Sundance. They talked for a while and by the end of the conversation he invited her to come see him in London.

Apparently they’re not even spending Boxing Day together now though, and although we got excited when Kristen Stewart went to the airport earlier this week, it turned out that she was going to Dallas where she was unveiled as the new face of Chanel. Oh. That’s not as exciting as Christmas Day in London, Kristen!

According to HollywoodLife, part of the problem with the Christmas Day plans was Rob’s dislike of the Twilight actress. Well…she did cheat on their precious Rob, it’s fair enough!

An insider revealed to the magazine: “Kristen would love to see Rob in London but she doesn’t want to be the source of any tension between Rob and his sisters.

She didn’t want to cause any drama with his fam, which is probably wise.

​The source added: “If things were different with the rest of his family, she would be there for Christmas, but she still has concerns.

“The last thing she wants is to bring any drama whatsoever to Rob’s world.”

We’re sure they’ll have a happy Christmas separately, but still! Are they completely finished as a couple now? Or will Kristen be heading over to England for New Year’s Day instead?

Do you want them to get back together? Tweet us @sofeminineUK