­­­­Kristen Stewart is the new face of Chanel

Look who has joined the ranks of style icons like Diane Kruger, Blake Lively and Brad Pitt. Karl Lagerfeld has handpicked Kristen Stewart to be the new face of Chanel in an ad campaign to be released in May 2014. We can't wait to see the pictures!

Edgy, brooding beauty Kristen Stewart has been chosen as the new star of Chanel’s Métiers d’Arts ad campaign. She and designer Karl Lagerfeld appeared in Dallas on Tuesday to announce the news.

The designer sported his signature look, a white-collared black shirt and white ponytail, while the starlet appeared in high-waisted orange leather palazzo trousers and a beige crop top with a tee wrapped around her hips.

While the brunette may not be an obvious choice to some, considering her red carpet fashion sense is either a spot-on hit or major miss, she and the designer label do have a history.

Three years ago at the 2010 Met Gala, she wore a stunningly chic Chanel Couture gown with a see-through bottom.

Three years later, she was given a front-row seat at Chanel’s July Haute Couture fashion show, where she wowed crowds in a white blazer and black shorts, with black pumps and kickass punk accessories.

The Chanel gig won’t be Kristen’s first experience with luxury fashion campaigns either. Last year, the actress posed as the face of Balenciaga’s fragrance, Florabotanica, in an ad shot by famous photographer Steven Meisel.

With her red carpet pout and no-nonsense approach to fashion we reckon she'll be adding a whole new dimension to Chanel - we're expecting the unexpected with their new campaign.

Karl Lagerfeld will be shooting Kristen’s ads himself, and the campaign will be released in May 2014. We literally can't wait to see the results!

What do you think of Kristen as the new face of Chanel? Tweet us @sofeminineUK. 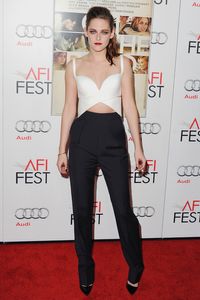