Robin Thicke and Britney Spears reportedly had a fling back in 2003. At the time Britney was the undisputed princess of pop, while Robin had not yet achieved chart success (or twerking notoriety with the current pop princess Miley Cyrus). Since then they’ve both moved on with other people, gotten married and had kids, but can you imagine what a pop power couple they would be if they were still together?

Robin Thicke and Britney Spears were once an item according to recently surfaced reports.

But Robin hasn’t been cheating on Paula Patton, his wife of eight years, with Britney – as the whole thing apparently took place a decade ago!

A source has revealed to In Touch that the fling took place in 2003, when Britney was at the height of her pop fame, while Robin was still a relatively unknown singer struggling to break into the charts.

The insider said: “He was trying hard to develop a reputation as a hot, young singer, and Britney was the biggest thing in show business.”

Reportedly the two met collaborating on a project (which was never released) and this was when they “started hooking up.”

At the time Britney was recently single after splitting with Justin Timberlake, but the following year she married Jason Alexander in the Little White Wedding Chapel, Las Vegas in January.

But Robin Thicke’s reps have been quick to rubbish the reports of a hookup with Britney, although many have since speculated that it’s because the Blurred Lines singer has always maintained that he had been dating actress – and now wife – Paula since meeting her in high school aged 16.

So far Britney, who is currently gearing up for her Las Vegas residency Britney: A Piece Of Me, and her reps have not addressed the rumours.

If it’s true, we can’t believe they managed to keep this piece of juicy gossip hidden for so long!

Do you believe Robin and Britney had a fling? Tweet us @SofeminineUK! 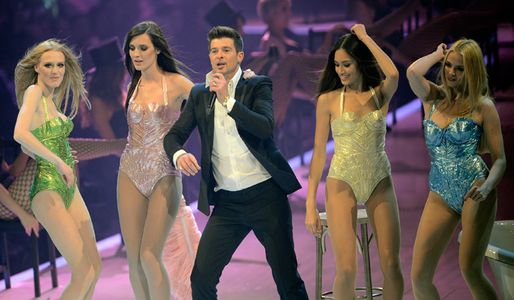