by Alison Potter Published on 12 November 2012

There were several surprises on this weekend’s Strictly Come Dancing, the most jaw-dropping being Fern Britton’s unexpected strip during a sexy salsa with partner Artem.

But it wasn’t enough to keep the 55-year-old former morning TV presenter in the competition, as she was given the boot after ending up in a shock dance-off with Girls Aloud star Kimberley Walsh.

Fern first took to the stage in a frumpy blue cleaner’s overall, but as she strutted up the judging panel, she tore it off to reveal her newly-toned dancer’s body and her skimpiest dress yet.

Wearing a fringed fuchsia mini-dress, Fern and professional dancer Artem Chigvintsev, 30, danced the salsa to You’ll Be Mine by Gloria Estefan.

Even though Fern is undoubtedly one of the UK's best loved television personalities, her performance on Strictly didn’t manage to win her enough viewer votes and after the dance-off with singer Kimberley, the judges decided to send her home. 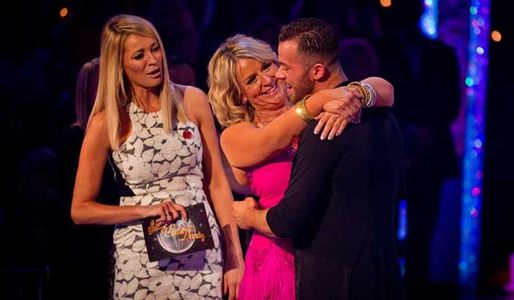 The judges unanimously chose to save the Girls Aloud star, with Craig Revel Horwood scathingly describing the choice between the two couples as a “no brainer”.

The 30-year-old girlband singer has been a strong contender in the competition so far and many were shocked to see her land in the bottom two along with her partner Pasha Kovalev after performing the tricky Viennese Waltz.

Hard-to-please judge Bruno Tonioli had described their effortless waltz as “achingly romantic” and they had been awarded what would have been considered to be a ‘safe’ score of 34, in comparison to Fern’s paltry 27.

Although Fern was clearly disappointed, she took her defeat graciously, declaring: “This is the best party on the television, it's the best programme in the world, and I'm thrilled to have been part of it.”

The former This Morning presenter wished her competitors luck and also thanked her dancing partner, telling the Russian ballroom dancing pro: “Artem, I've loved it. I wouldn't have swapped you for anything.

“There have been highs and lows, we've got to know each other pretty well, and I do adore you.”

At the top of the leader board this weekend was presenter Denise Van Outen and her dance partner James Jordan.

Despite not having as much time to rehearse due to James having to seek treatment for a tendon injury, the pair scored a massive 36 out of 40 for their paso doble, which is the highest score of the series so far.

Strictly also scored high with viewers as it landed its biggest audience of the 2012 series, achieving two million more viewers than the X Factor.