"Take Your Money And Get Off My Property." Is This The Worst Come Dine With Me Loser Ever? 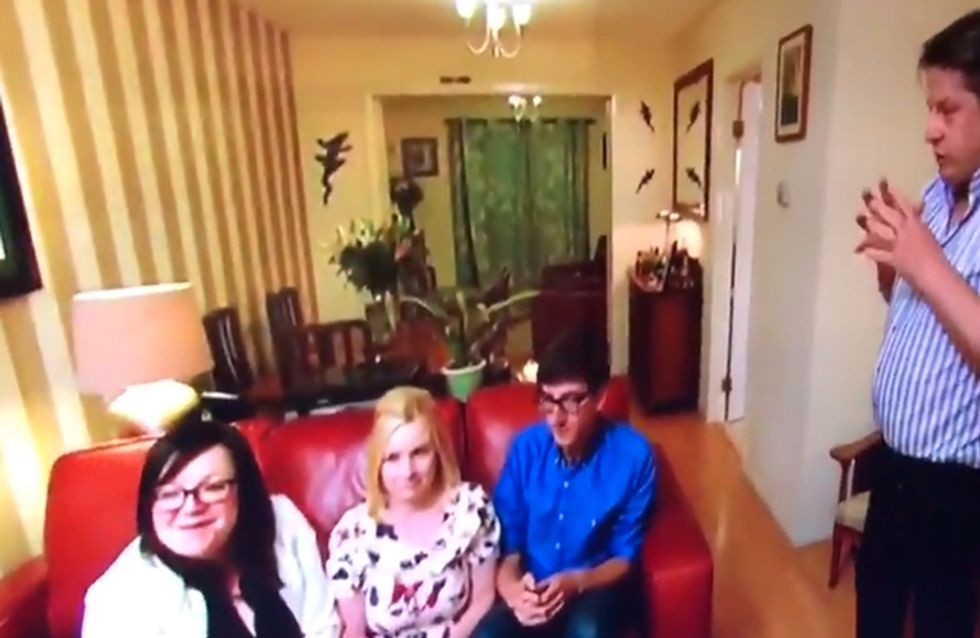 It sucks to lose, especially if you have a competitive nature, but it still doesn't quite excuse the sensational outburst from 'Come Dine With Me' contestant Peter, who threw quite the dramatic wobbly after losing out on the grand prize of £1000. Jeez Pete, we all get angry when we lose from time to time, but did you forget you were being filmed?!

The man the world is now calling 'Come Dine With Me's' sorest EVER loser kicked off at a fellow contestant last night after she won the big prize. Accusing her of sabotaging his night to host the dinner party so that he would score low and she would win, telling his fellow contestant: "you ruined my night completely so that you could have the money that I hope you spend on getting lessons in grace and decorum."

He continued that she has: "the grace of a reversing dump truck without any tyres", which is a statement we're certain he must have practised in the mirror before kicking off, because that is SPECIFIC. When another contestant claimed not to understand he replied: "Well you wouldn't. Let's be honest there's nobody in there love." WOAH.

What just happened on Come Dine With Me? 😂😂 pic.twitter.com/Pw0KPl4AxF

After glancing at the camera in the moment that seems to say: "everyone will agree with what is happening right now," Peter concluded his rant with: "So Jane, take your money and get off my property" as the two other contestants sat in excruciating silence, and as one Twitter user pointed out, the three remaining members of the party had to go and awkwardly pop the traditional champagne outside in celebration.

In case you wondered what happened next in that #ComeDineWithMe, the winner and contestants then drank on the street pic.twitter.com/CcpHlVImgO

As you could imagine, Twitter was in an uproar about Peter's behaviour:

Urge people to jump on channel 4 + 1 now for this incredible come dine with me. Absolute scenes. Best ending ever #comedinewithme

The ending to Come dine with me was savage 😂😂😂😂 It's the look at the end that kills me 😭 pic.twitter.com/63J3FLycJS

Omg that Come Dine With Me 😅😅😅 Savage pic.twitter.com/KyVSMPpV6J

Of course, this isn't the first time someone has lost their cool after losing a 'Come Dine With Me' competition, as last year Heather went into hysterics after coming in fourth place. This pair should probably meet up and compare notes.

What did you think of last night's episode? Tweet us @sofeminineUK!