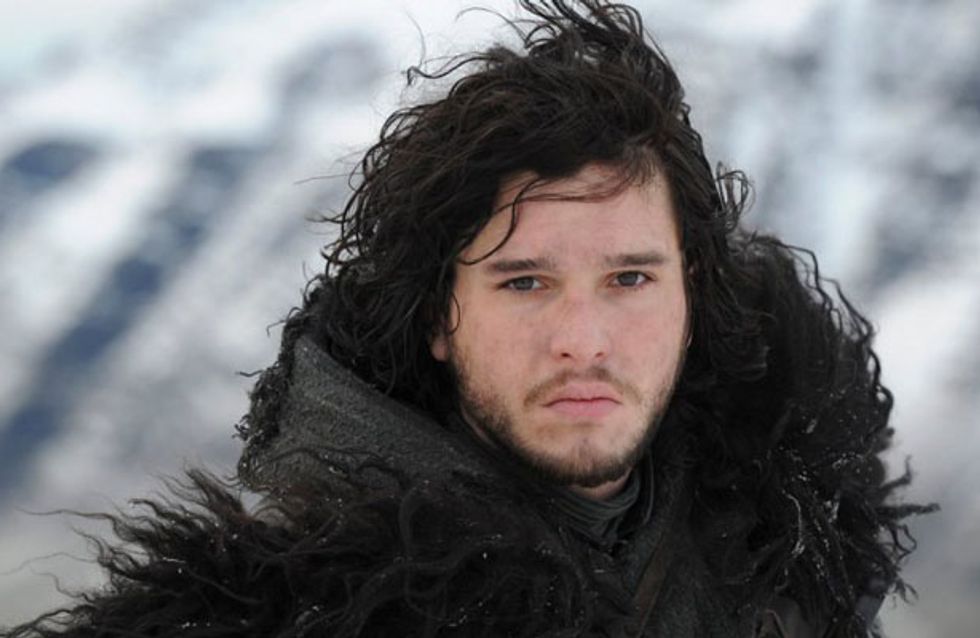 If you are a GoT fan you’ll know that Jon Snow is the one with the perfect hair and smile-free face who also happens to be Ned Stark’s bastard son. But is he though? IS HE? As the book lovers and passionate Internet users have come to suspect for quite some time now, the truth about his parentage could make the whole show considerably more interesting…

Thanks to the guy who explains it all in a nifty YouTube vid, we’re convinced that this is one theory that HAS to be right! Word of warning! This is a theoretical spoiler, so if you'd rather not know do not read on!

The story is given that whilst at war, Ned had an affair and brought home his bastard son, Jon Snow.

Here he is in all his miserable finery.

But the crazy yet entirely plausible theory is that Jon isn't Ned's son, and that his true parentage is Ned's sister Lyanna Stark and Rhaegar Targaryen.

Lyanna basically single-handedly started the war after she was kidnapped by (or ran away with) Prince Rhaegar Targaryen, who apparently was the fittest guy in the Kingdom of whom everyone wanted to bone.

It’s made clear that Rhaegar liked Lyanna, since he chooses her instead of his wife to give a token to at a jousting Tournament.

After Rhaegar is killed, Ned finally finds a dying Lyanna, and in the books he keeps remembering her saying: “Promise me, Ned” whilst in a bed of blood. As the theory goes, the bed of blood is because she’s just given birth…

It’s generally thought that this promise she speaks of is for Ned to hide baby Jon and raise him as his own, rather than reveal that he’s a Targaryen. This could be due to the fact that Robert Baratheon was killing off the Targaryen children left right and centre.

So Ned kept his promise and claimed Jon as his own, not even telling his wife the truth, who ends up hating Jon as the physical embodiment of Ned's supposed infidelity.

It should also be noted that Ned never refers to Jon as his son, and when he lists his children, he misses out Jon.

So if Lyanna and Rhaegar married during that time (Rhaegar was already married but Targaryens were allowed a shed load of wives and he and his missus didn’t have the best relationship) this would mean that Jon Snow is the rightful King of Westeros.

Which means he has a better claim than Daenerys.

And it would also explain why the series is called A Song of Ice and Fire, he is half Stark (ice), and half Targaryean (fire).

IT ALL MAKES PERFECT SENSE

Here's the video that looks at the theory in greater detail...

Of course there are other theories, so really it could be anything. What do you think, or would you rather wait and find out? Tweet us @sofeminineUK

Enjoyed this article? Try these out!