by Emmy Griffiths Published on 22 December 2014 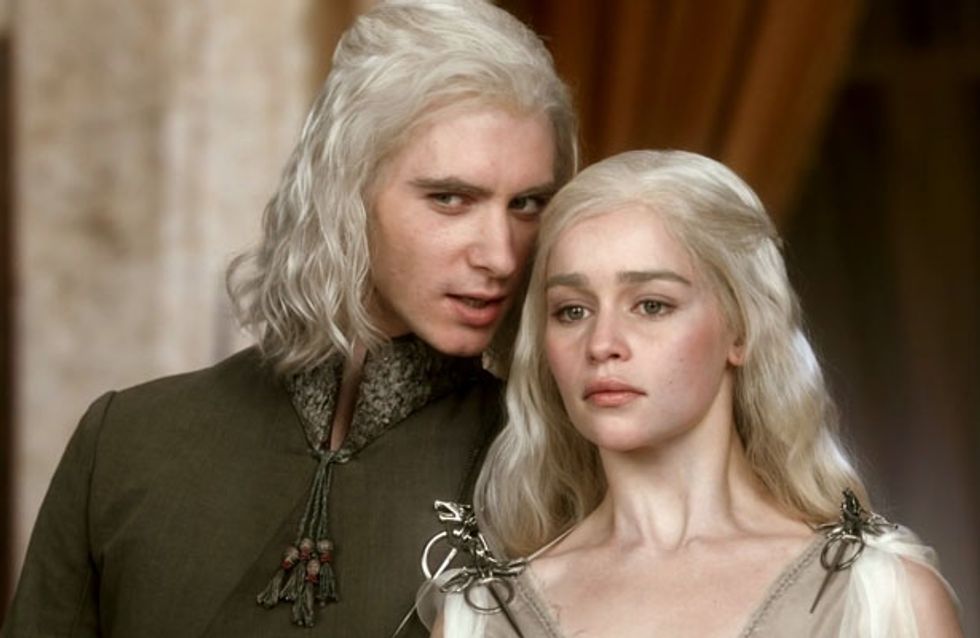 Ever wondered how George RR Martin’s mind could be so dark? It’s because some of his ideas literally came from the dark ages. Honestly some of the stuff that we have seen on screen was pilfered from medieval times, confirming that history is MESSED UP.

In Game of Thrones it’s obvious Viserys wants his sister, and it’s general knowledge that the Targaryean’s regularly wed brother to sister. Sounds like…

Cleopatra was married at the age of 12 to her five-year-old brother Ptolemy XIII. They didn’t enjoy married life, and she eventually deposed of him in her quest for sole power. At least she didn’t let anyone pour molten gold over his head.

Joffrey’s choking death in the Purple Wedding (lol, bubye) ended the reign of the sadistic, evil manchild. Sounds like…

Prince Eustace IV was the eldester son of King Stephen of England in the 1100s. Whilst plundering church lands he ate some food, turned purple and died on the spot. This instant karma was met with great satisfaction as Eustace was described as “an evil man and did more harm than good wherever he went”.

The Red Wedding where Robb Stark, his pregnant wife and long-suffering mother were massacred along with most of the Stark followers whilst they were all under the protection of hospitality. Sounds like…

In the early fifteenth century the Black Dinner saw the Douglas family murdered after being invited to dine with King James II.

The Lord of Light

The Red Priestess’s creepy religion has her using fire to see the future, chats to the Lord of Light and thinks death by fire is ‘the purest death.’ Sounds like…

A Persian faith called Zoroastrianism believes that fire is purifying and there is a equal amount of light and dark in the world.

When Ser Dontos turned up p*ssed as a fart to Joffrey’s birthday, he has wine funnelled into his mouth until saved from death by Sansa. Sounds like…

A medieval torture device called the water cure. Prisoners had to drink so much water that they drowned. Least with Ser Dontos managed to get alcohol…

Remember the wildfire Tyrion scored for the Battle of Blackwater Bay? He planted it in the harbour so that once it was lit it would destroy Stannis Baratheon’s fleet with the unstoppable flames? Sounds like…

A real weapon called Greek fire which also burns in water and was used by the Byzantine naval forces.

The men and women of Westeros is protected from all those mean old Wildlings by The Wall, a massive structure that runs across the North of the Seven Kingdoms. Sounds like…

In the UK a huge wall was built in the year 122 to protect Roman Britain from barbarians in the North.

At Harranhal soldiers tortured the villagers about what they knew about the Brotherhood without banners. They strapped a bucket with a rat inside, and then gave the rat nowhere to go but to burrow into the chest of the poor person tied to it. This is probably the most gruesome thing Game of Thrones has ever done, and for gods sake it’s based on real life!

This is was a form of torture during the 16th century Dutch revolt. Vom.

There are key similarities between Robert, Renly and Stannis, and the three York brothers, Richard III, George and Edward IV.

Harranhal is supposed to be cursed, known for the untimely deaths of it’s many owners, and a ground to imprison and torture prisoners. Sounds like…

Pontefract Castle in Yorkshire is thought to be haunted, cursed, and was used to imprison and torture prisoners…yeah…

Everyone’s favourite Game of Thrones gay couple Renly and Loras sound a lot like Edward Prince of Wales, to be King Edward II and Piers Gaveston. Edward was described as “too much given to sodomony.” The royal’s BF ended up beheaded on the orders of four English earls, and Gaveston’s head was sent to Edward. Brutal.

Does anything else from GoT/history come to mind? Tweet us @sofeminineUK