by Emmy Griffiths Published on 21 February 2014 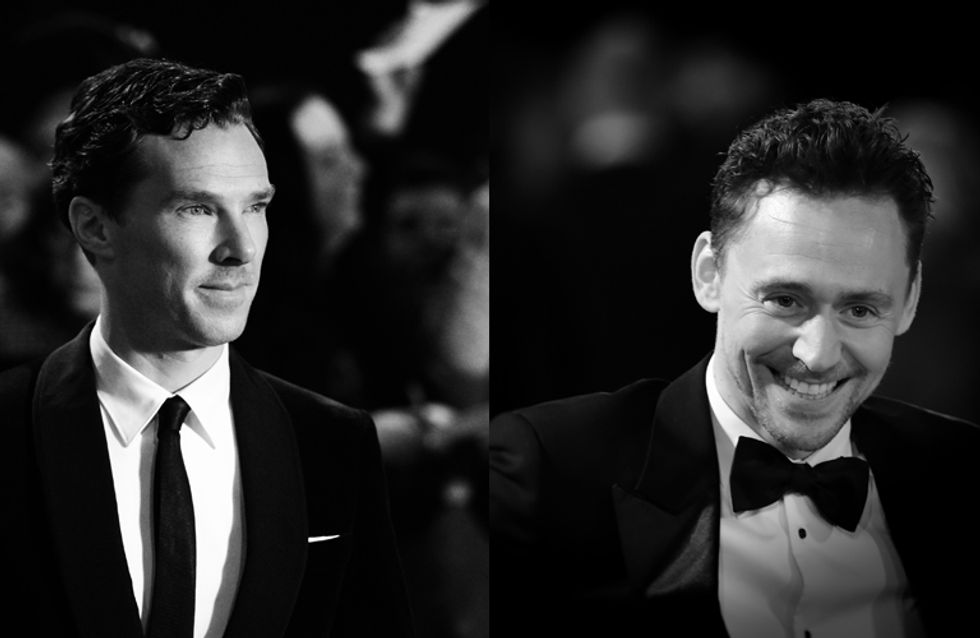 Tom Hiddleston and Benedict Cumberbatch are adored by the world and are similar in many ways. They both have beautiful British mannerisms, wicked sense of humours and are not afraid to mock themselves. Oh, we probably shouldn’t forget to mention that they are both unbelievably sexy. But who comes out on top in the battle of the sexiest upper middle class actors with voices of velvet?

But... Tom Hiddleston could win an Oscar with his impression of Owen Wilson. He does Alan Rickman too. And a Velociraptor. Let's not forget his visit on the Graham Norton when he did an entirely accurate impression of Robert De Niro TO HIS FACE.

Winner: Benedict Cumberbatch. Even Harrison Ford was impressed with his rendition of Chewy.

It looks like Benedict Cumberbatch is more the prankee than the pranker – during the filming of Star Trek, Simon Pegg told Benny that he had to wear dots of cream of his face to neutralise the neutrons and he BELIEVED IT.

Tom Hiddleston is quite the prankster prince with his “Loki’d” ways – basically in a skit he goes out of his way to prank his friend Josh Horowitz by doing things like giving him decaffeinated coffee and paying for his lunch to make him look foolish at the check out. LOKI’D!

Benedict Cumberbatch loves to dance, and there’s a particularly hilarious video of him grooving along to Thriller. Of course we can’t ignore his ballet skills in series 3 of Sherlock as well. Rocking that pirouette Benedict. Great job.

You don’t even need to ask Tom Hiddleston to dance – he’ll just do it. He’s grooved all across the world as fans have fallen deeply in love with his mad moves.

Winner: BOTH. This isn’t against the rules. WE MAKE THE RULES.

Benedict Cumberbatch played the malevolent Khan in Star Trek: Into Darkness and stirred fear (and adoration) in our hearts with his rage that bubbled just below the surface. We also totally knew he was Smaug and as such that dragon was much sexier than ever intended. But there is something distinctly unlovable about Khan and Smaug though…it might be that they tear heads in half and hoard treasure etc.

Tom Hiddleston shot to fame as fan favourite Loki from the Marvel universe, an Asgardian who finds out he's actually an adopted Frost Giant and that is why he has always felt overshadowed by his brother Thor and undervalued by his father. He has now played the role of the mischievous God in three movies, and we never want him to stop. Ever.

This is a tricky one. Benedict Cumberbatch’s fans affectionately call themselves Cumberbitches (or the Cumber Collective, or Cumber Cookies, or simply just Cumbers) and fawn over him like the God that he is (quite rightly). During the Graham Norton show fans came to adore him from Germany, Hong Kong and Nebraska! NEBRASKA.

Tom Hiddleston’s fans lurve him. The Hiddlestoners dominate Tumblr, which you only need to glance at to be hit with a whirlwind of gifs. It will be overwhelming. But wonderful. It’s also a little awkward that Loki is a MUCH bigger fan base than the Marvel good guys.

Benedict Cumberbatch helped count some apples and oranges whilst Murray and the Count thought he was Sherlock. He turned out to be utterly useless at counting.

Tom Hiddleston taught the Cookie Monster all about delayed gratification by asking him to wait to eat his cookie. THE COOKIE MONSTER LISTENS TO HIM. This is the self same Cookie Monster who once ate the MOON because it looks like a cookie. Tom must have powers none of us could have imagined.

Benedict Cumberbatch and Martin Freeman ARE Sherlock Holmes and John Watson, who in turn are the greatest broamnce of all time, so Benedict is surely a shoe in for this award, right?

Tom Hiddleston and Chris Hemsworth though. These two quip and tease each other all the time, oh, and they’ve been on a road trip along with Liam Hemsworth. Interesting.

It’s a TIE! Look how that worked out! Or are we wrong? Are we simply being too fair? Tweet us your opinion @sofeminineUK !

This Video Of Tom Hiddleston Singing Will Give You Life