by Emmy Griffiths Published on 21 October 2015

When SoFeminine was asked if they wanted to go try fire eating, breathing and body burning to celebrate the DVD release of American Horror Story: Freak Show, our editor delightedly RSVP’d…for me. Since I have a reputation for being ‘afraid of danger’ and can’t light a stove hob without shrieking, I was determined to change my rep by eating fire and kicking ass. Here’s how I almost entirely failed…

“I don’t want to be here”, a fellow journalist nervously tells me in the car. “I drank so much wine last night. Do you think that’ll set me on fire?”

I do not know. I don’t think it will, but as we enter the barren (and freezing) warehouse where the class will take place and our teacher Sarah begins to tell us the dangers involved when fire eating, I begin to wonder. Fire eating comes with its hazards. It can damage your health, we will probably end up ingesting a small amount of fuel by the end of the class and if you don’t do it properly you can and will burn yourself. I involuntarily shake my head. The journalist from the car firmly crosses her arms.

After gulping down a bit of lunch (it’s good to eat fire of a full stomach, because of that afore-mentioned fuel ingestion) and having a short safety talk, we got right down to it. If one thing can be said about Sarah, it’s that she goes at a quick pace and I shocked the hell out of myself when I realised that I could keep up.

After Sarah demonstrated the moves we would learn in the class: rubbing a lit wick down our arms, licking it and finally ‘swallowing’ the flame, my immediate reaction was that in no way would this happen. No way at the end of this class would I EVER be putting fire in my mouth. Not today, Satan.

But then she has us come forward one by one and push the flames (firmly and slowly) over our palms and I surprise myself by actually doing it. As you can see, I was freaking delighted.

Next we rubbed the flames over our arms, and while the air filled with that terrible indescribable stench of burned hair, the flames actually didn’t feel that bad! In fact, I began to get the feeling everyone was happy to do it as it meant some warmth in the freezing warehouse in October.

Thus far, my fire experience had been a good one. The fire senselessly did NOT burn me. Sarah was patient and an excellent teacher. We all began to feel much better about what we’d let ourselves in for. Then the fire licking began.

The trick to licking fire is to have a whole lot of saliva. Since your mouth is moist it is better equipped for fire than our arms or hands, it should have been a walk in the park. All we needed to do was have plenty of saliva build up to avoid our tongues burning, and just own it.

I don’t know about you, but when I get nervous my mouth gets dry. No amount of water or flicking the saliva gland under the tongue was helping moisten it up, and so I licked fire knowing that my tongue was basically the Sahara desert. Although it wasn’t too bad, this gave that very unpleasant experience of when you drink a cup of tea or soup too quick and burn your tongue. I hate that feeling.

As it turns out, fire eating was not my forte.

When we eventually got round to the final and most impressive trick, popping the lit wick onto your tongue, ‘eating it’ then blowing out the flame while in your mouth, I managed it only a couple of times, with the rest of the time spent psyching myself to once again put the wick on my newly burned, dry-ass tongue and failing to blow it out, leading to visually dynamic but embarrassing candid moments such as this:

Thus ended our flame eating session and now it was time for fire breathing. As a Game of Thrones fan and delighted at the thought of fire moving away from my face rather than towards it, I was quick to try it.

After an hilarious session spraying water ‘as though you’re blowing a trumpet’ all over the warehouse, it was time to do the same thing with paraffin. Sure, holding paraffin in your mouth was absolutely disgusting, but spraying it onto fire which then bursts forth like a dragon made it all worth it.

​As I readied myself for my first try, our new teacher Guinness World record holder Preacher Muad-dib (genuinely his name) held a damp towel near me ‘just in case’. Eyeing the damp towel and imagining myself running out of the warehouse completely ablaze and screaming like the Steward of Gondor, I just went for it, and it was AWESOME.

“Dracarys amirite?” I say gleefully. A tumbleweed rolls past.

Preacher then decided to show us how it was done, and my efforts seemed sad in comparison. Seriously though, how are you meant to pretend to be a fire breathing dragon when THIS shit is going on?!

A side effect of the whole ‘hold-paraffin-in-your-mouth’ thing is that both Sarah and Preacher encouraged us to spit it all out rather than be polite and swallow (in large measures it can be very dangerous) and so we all began timidly and rather embarrassedly nipping into the corner of the room and/or around the corner to get rid of the pesky paraffin. However, by the end of the session ALL BETS WERE OFF when it came out just getting rid of the poison in your mouth. I began to enjoy this newfound freedom. All social taboos were off! What I once found disgusting was now necessary! This was brilliant!

After the session and at dinner, one of my new found friends (there’s something about fire eating that really brings people together) joked about how much spit was on the warehouse floor at this point.

‘Especially from you!’ one said, pointing at me. The others chorused happily in agreement.

“Was – was no one spitting as much as me?” I asked. All social taboos that were so briefly smashed came rushing back in a blaze of shame. I will never trust, or spit, again.

Before I knew it, that was that. With charred arms and a drinking-tea-too-fast burned mouth and yet an immense sense of achievement, the class was over. Even now looking at the pictures I can’t believe I did it, or just how easy it seemed at the time. I might be a few steps away from running away with a freak show, but at least I have something to offer them! 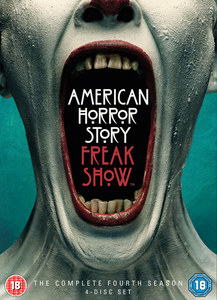 Would you want to give it a try?! Get in touch with Sarah at The Fire School. Also see the professionals do it PROPERLY in the DVD release of American Horror Story: Freakshow, which will be out on DVD October 26th!