This Redhead Calendar Is Making Gingers The New Sexy

We all know gingers get a bad rep when they're at school. If you're born with a head of flaming, titian locks, it's almost guaranteed that the years between 12-17 are going to be somewhat hellish, and gingers have had to make their peace with that. So nothing could be MORE satisfying than seeing a big group of gorgeous ginger guys team up for a calendar to raise funds for a variety of anti-bullying campaigns. Go team ginger!

It's almost a guarantee that for Christmas some great Aunt or Secret Santa will gift you a calendar and guess what? The vast majority tend to have people on them in various states of undress. So whether your usual yearly calendar involves Peter Andre with his chest out or the Firemen of New York looking smokin', chances are you'll be looking at some very naked torsos for the next 12 months. But forget Peter Andre and forget the firemen, because 2016 is the year of the gingers and these guys are making sure your year is going to be RED hot!

British photographer Thomas Knights has outdone himself with this idea. Check out the photos below and make sure you have a fan to hand... 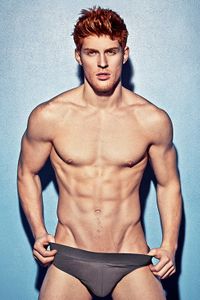 So not only do we get a brand new monthly redheaded and ripped model, by buying the calendar you are also contributing to anti-bullying campaign for children in schools. Sounds good all round to us!

This isn't the first ginger campaign Knights has done. His book, Red Hot 100, aimed to rid the negativity surrounding men with red hair and reignited our life long love affair with ginger men... Speaking of the campaign, he said: "Guys with red hair don't have the positive role models that girls do in our culture. A male with red hair is not seen as aspirational, culturally speaking, with very few leading men, heroes, action stars or heartthrobs played by men with red hair in Hollywood or on our TV screens. Also the more laddish culture of banter - that maybe is not so prevalent in female friendship circles - creates a fear of speaking out based on the concept of 'it was just a joke'.

"While many people may argue calling someone a 'ginga’ or any other 'fun' words for people with red hair is just witty banter, for some of those on the receiving end, the impact to their self esteem is felt much more deeply and can have lasting, detrimental effects at school and way into their adult life. Red Hot is my response to this."

Basically, Thomas is the hero all gingers seriously need.