Saywhaaat? Tom Hiddleston And Taylor Swift Are TOGETHER?! 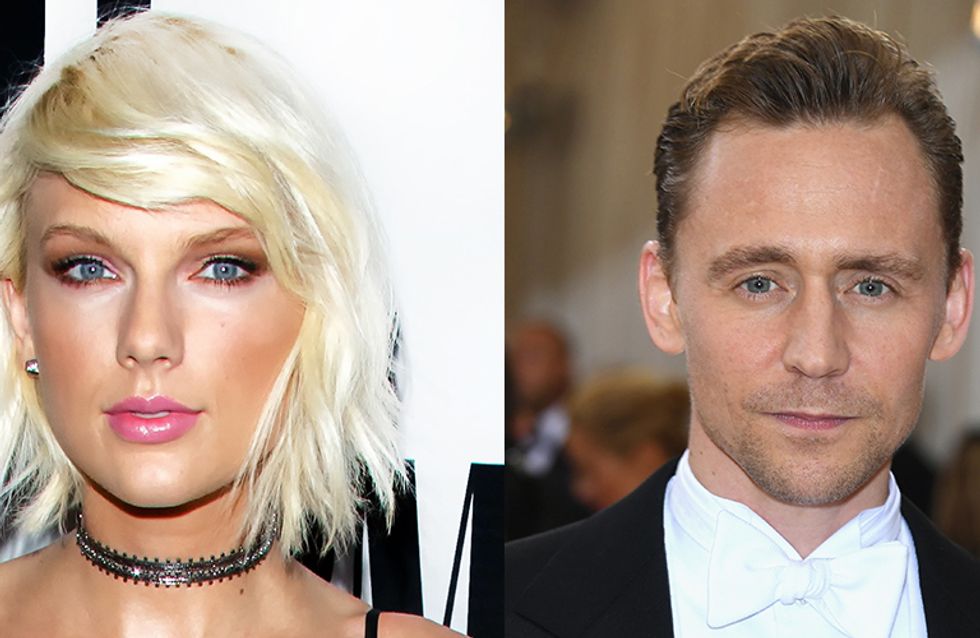 Take cover guys: the world has gone into meltdown. The walls of the Internet are crumbling and the end is nigh. The web's biggest and most precious internet crushes have joined forces to create 2016's first social media supercrush. You got it: Taylor Swift and Tom Hiddleston appear to be dating.

We should have known from the overtly sexual dancing we witnessed at the Met Ball that something was bubbling up between Taylor Swift and Tom Hiddleston. Hips don't lie, after all. But if that video of Tom Hiddle and Tay Swizzle bumpin' n' grindin' all up on each other's crotches to T.I's 'Bring Em Out' wasn't enough to convince you that - to quote old Swifty - it's a love story baby, then maybe these new pics will.

Looking like something from a Jack Wills catalogue, The Sun has obtained pictures of Tay Tay and Tom canoodling atop a rock overlooking the ocean. Tom was the perfect gentleman: helping Taylor up over the rocky terrain, giving her his coat when it got cold - I mean, he is British after all. It's basically in his genes to be that polite and dreamy. Just take a look:

There they are, having a moment alone, holding hands - mere weeks after she split from superstar DJ Calvin Harris, remember. Oh and there they are again, taking a quick selfie - probably one for the HiddleSwift photo album, because that's the portmanteau they'll be going by from now on. It truly is romantic, in a Gen-Z kinda way. But of course they're not alone on that beach - there's obviously photographers papping them, too. They don't, however, seem to think three's a crowd.

Look what finally came in the mail! pic.twitter.com/CowP3P72KS

But hold on - wasn't Taylor only with another British heart throb only mere weeks ago?

Yep, it seems like Calvin Harris hasn't taken the news of his ex's new squeeze too well. Calvin, 32, had previously tweeted that despite their split there was still 'a huge amount of love and respect' between the pair. Well, not any more! Eagle-eyed social-media types have noticed that Calvin and Taylor are no longer following each other on Twitter, and both have deleted any evidence that they were ever together from their respective Instagram accounts. No more swan pics. Sad times.

But could this be the ultimate pairing? Taylor obviously likes herself a British boy, and it seems she's constantly upgrading them: first Harry Styles, then Calvin and now Tom - the final evolution of Brit boy, the Charizard to Styles' Charmander. See, this article by Us Weekly shows Taylor and Calvin on a glamorous date night, but notes that Calvin headed out with a slightly "scruffier look" to go eat Italian food. (I may be wrong, but isn't the correct attire for eating copius amounts of pizza and pasta stretchy pyjama bottoms? No?) Can you imagine Taylor stepping out with Tom on date night - Mr Dapper himself? He probably wears a suit made of silk to bed! It would be INSANE. Every moment of their lives together would be like an expensive perfume ad. It would be all slo-mo walks and intense violins following them everywhere they went.

look at her, in the back. Tom. smh. you knew this photo op with Idris would blind us to your betrayal. pic.twitter.com/5fC5eqS3eP

What do you think of this pairing? Let us know! @sofeminineUK