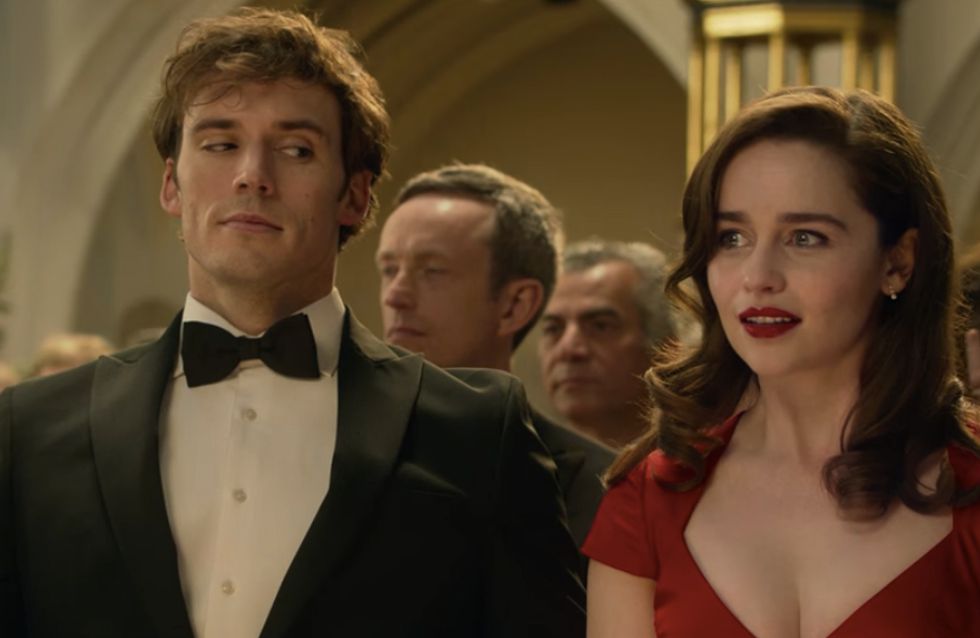 We can't lie: we have been waiting for the release of Me Before You for a long, long time. From its top notch cast of Sam Claflin and Emilia Clarke (but why can't we BE her?), to its romantic/tragic storyline, we love the book AND the film equally. Which got us to thinking - there really are so many good book-to-film adapts when it comes to our favourite romantic stories. But can we really narrow them down to our top ten? Well, we tried.

The movie, which comes out 3rd June, is based on the novel of the same name by Jojo Moyes. It follows the lives of 26 year old Louisa Clark (Emilia Clarke) and Will Traynor (Sam Claflin), who are thrown together after Will is left paralysed in an accident. Will inspires Lousia to become more ambitious in life and broaden her horizons outside of the small village they reside in, whilst Louisa brings a happiness to Will's life that he didn't know was possible after his accident. Not many films are able to make a whole cinema cry, but Me Before You does that rare thing where, at certain points, the film is barely audible over the sniffing and caterwauling of romcom fans. But, as many people know from reading the book, this story will make you cry at the most inopportune moments - like on the train, for example. This film features a truly wonderful performance from Emilia Clark and Sam Claflin, as well as their supporting cast including Matthew Lewis as Lou's gym-obsessed boyf (helloooo Neville!) and Charles Dance as Will's father. Just remember to take a pack of tissues with you. Actually, make that five...

Oh The Notebook. Everyone's favourite romantic movie. The film that propelled Ryan Gosling into other-worldly Sex Godliness. The film was adapted by the novel by romance pro Nicholas Sparks, whose you may also recognise from such other major tear-jerkers as The Lucky One, Dear John and - our personal favourite - A Walk To Remember. But The Notebook is The Ultimate. It's the film which has spawned millions of dedicated Tumblr pages. The Notebook is the book on which all women now base their relationships on. Like, yeah it's love. But is it if-you're-a-bird-I'm-a-bird love? No? Kick him to the curb girlfriend! Thanks, Nicky Sparks, for raising our expectations for kissing in the rain - it's nowhere near as romantic as you made out.

Yes, yes, Gentlemen Prefer Blondes may be one of the best films of all time, let alone the greatest romcom, but did you know it was based on a comic novel by Anita Loos entitled Gentlemen Prefer Blondes: The Intimate Diary of a Professional Lady? First published in 1925, the book documents the jazz age, in a similar way F. Scott Fitzgerald's The Great Gatsby did. Loos was inspired to write the book after watching a hot blonde turn her friend and intellectual journalist H.L Mencken into a giggly schoolboy. The 1953 movie, which stars Marilyn Monroe and Jane Russell, is considered one of the greatest, and features Monroe singing 'Diamonds Are a Girl's Best Friend' in THAT now-iconic pink dress.

And speaking of Twilight, we couldn't go through a run-through of our top romantic movie adapts without calling on Edward and Bella, could we? Stephanie Meyer's sexy vampire trilogy was released in 2005 and sold over 120 million copies, being translated into 38 languages. Which can mean only one thing: people want to see the star-crossed lovers IRL. And thus, Bella and Edward were brought to life by Kristen Stewart and Robert Pattinson in 2008, with an epically moody setting and oh-so cool soundtrack.

Forget Beyonce and Jay-Z or the Beckhams: Elizabeth Bennet and Mr Darcy were the original power couple. Jane Austen's 1813 tale of love and morality has been adapted many times for the big screen, but none better than the 1995 TV series featuring Jennifer Ehle as Elizabeth and the deliciously moody Colin Firth as Mr Darcy. And whilst we know it's not technically a film, we'll let this one slide, just because it's so damn good.

Bridget Jones's Diary author Helen Fielding was in fact inspired to write the Bridget Jones novels on the 6-part series adaptation of Pride and Prejudice, which is just one more thing to thank Colin Firth for I guess. The books follow the diary of Miss Jones, a thirty something singleton as she stumbles through life, one bottle of wine and a ciggie at a time. Bridget Jones's Diary was adapted into a film in 2001, with a virtually unrecognisable Renee Zellweger as Bridget, Hugh Grant as the devilishly handsome Daniel Cleaver and Colin Firth, basically reprising his Pride and Prejudice role as the surly Mark Darcy. Bridget Jones: The Edge of Reason came next in 2004, and now Fielding's third book in the series, Bridget Jones: Mad About the Boy, is currently being made into a film, with the original gang back together (bar Hugh Grant), as we speak!

Love and Other Drugs

Love and Other Drugs, featuring two of Hollywood's most beautiful people - Jake Gyllenhaal and Anne Hathaway - was in fact based on a non-fiction book titled Hard Sell: The Evolution of a Viagra Salesman by author Jamie Reidy, looking into his life as a drug rep which ended up with him selling viagra. Hathaway plays Maggie Murdock, a sufferer of early onset Parkinson's disease, whilst Gyllenhaal plays Jamie the handsome pharmaceutical rep. Do they fall in love? Maybe. Do things get complicated? MAYBE.

David Nicholls's 2009 novel One Day is a love story that takes place over a whopping 18 years. Like Me Before You, this one requires a hefty amount of tissues, so for the love of god don't forget them, or you're screwed! The novel was adapted into the 2011 film by the same name, with a screenplay adapted by David Nicholls, and starred Jim Sturgess as Dexter Mayhew, and Anne Hathaway as Emma Morley, complete with a rather dodgy Yorkshire accent. It follows the pair through their - oftentimes turbulent - relationship. Will they end up together in the end? Well, it's not as easy as that...

Featuring a young, boyishly handsome Dustin Hoffman and the beautiful Katherine Ross, The Graduate will be forever known for the infamous 'Mrs Robinson, you're trying to seduce me' scene, but the film is essentially a romcom, with Hoffman's Benjamin Braddock falling in love with Mrs Robinson's daughter, Elaine - leading to the film's second most famous scene: Hoffman banging on the glass screaming 'Elaine!' at the back of the church where Ross is supposed to be marrying a different man. And then of course there's the iconic last scene of Hoffman and Ross riding off together on a bus with uncertainty painted across their faces. Let's face it, there's a lot of good scenes in this film. But The Graduate began life as a book of the same name by Charles Webb. And don't worry - the novel still has all the iconic bits in!