Top ten moments in Sherlock season 3 that made us go WTF!

by Emmy Griffiths Published on 6 January 2014 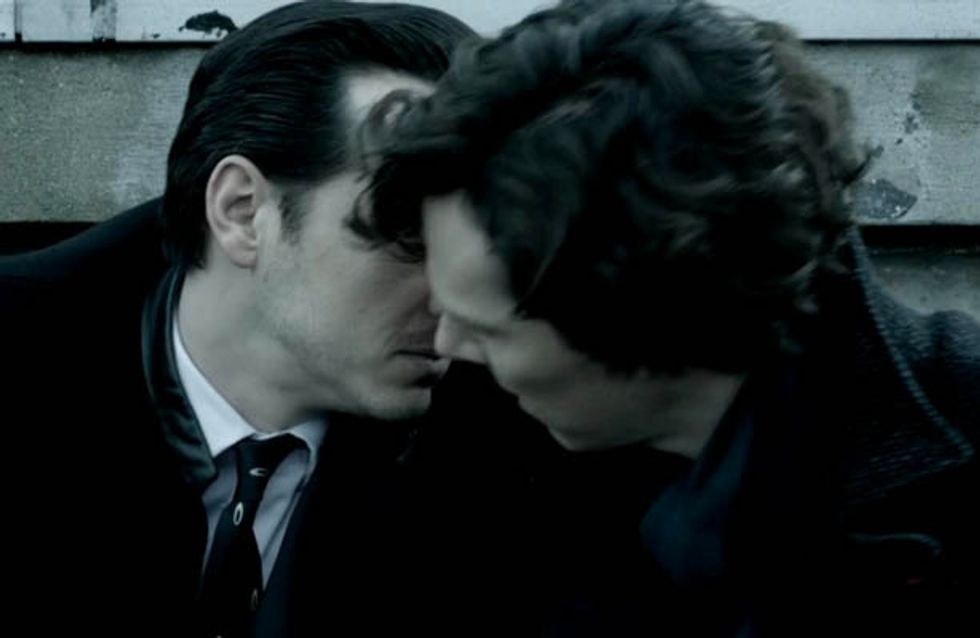 Although the series is only three episodes long and the third and final episode entitled His Last Vow doesn’t air until Sunday, we’ve already had enough trippy, bizarre happenings in the first two episodes to last us a lifetime. The writers of the show have definitely taken fan’s opinions on bored, and it will only take glancing at Tumblr or Twitter to realise how much love for the crazy there actually is. So what wins in the top 10 WTF moments?

1. Do you take eyeball with your tea?

If not the weirdest then definitely the grossest thing we’ve seen this series – Sherlock is busy experimenting with an eyeball and a blowtorch when John Watson takes him by surprise by asking him to be his Best Man.

The eyeball falls into the tea, which Sherlock then drinks, and apparently it’s “surprisingly okay.” Eugh.

Did anyone else snort when this happened? Sherlock decides to dress up in disguise to get into a building by dressing up as a member of the Queen’s Guard. He finds a fluffy hat and copies their movements…whilst wearing his normal clothes.

It was so stupid, but that’s okay because Sherlock making a fool of himself is always hilarious.

This was brilliant! When sober Sherlock works things out a flurry of words appears on the screen, reflecting his powers of observation, ingenuity etc. However, once Sherlock had a few, these observations turned hilarious. He saw a comfy chair: “sleeeeeep”. He saw a stereo: “high tech thing”. He saw something he didn’t quite recongise: “thingamabob.” Amazing.

It was lovely and touching, horrendously cringey and embarrassing and utterly bizarre in equal measure. Things definitely took a turn for the intense as well when Sherlock realised that someone in the room was a murderer. Just look at how evil his eyes are!

It has to be said, seeing Sherlock’s brother in something other than a suit was very odd – like seeing a dog walk on its hind legs.

Sherlock’s enormous fandom screamed – and apparently Mark Gatiss and Stephen Moffat listened! Like something out of a fan fiction, one of the how-I-jumped solution is that he and Moriarty were in it together before they went in for that kiss…and Tumblr just about exploded.

Sherlock makes friends with the maid of honour at John’s wedding and shows off his dancing by pirouetting. Argh, this was so cringey that we think it definitely classifies as a WTF moment!

8. Mrs Hudson IS the fandom

Mrs Hudson seems to be character speaking on behalf of the fandom. When John tells her he’s getting married, her reaction is delightful, asking him if he’s ready so soon after Sherlock. There is a reason the housekeeper was trending on Twitter for two days after the episode aired!

Sherlock is horrendously bored, listening to his bubbling clients. Though it turns out they’re not clients, they’re his parents, and they want their Sherlock to call them more often. Fun fact as well, the Holmes’ were also played by Benedict Cumberbatch’s real parents! Naw!

What we’ve been waiting for is finally happening. The jump is finally being revealed. It was Moriarty’s body! Sherlock was attached to a rope! This was just terrible!

Then, to make matters worse, Derren Brown showed up to wipe Watson out for a little longer. This was the moment where most people were utterly furious, though it turned out to be a clever trick. Not cool.

Did your favourite WTF moment make the cut? Tweet us @sofeminineUK