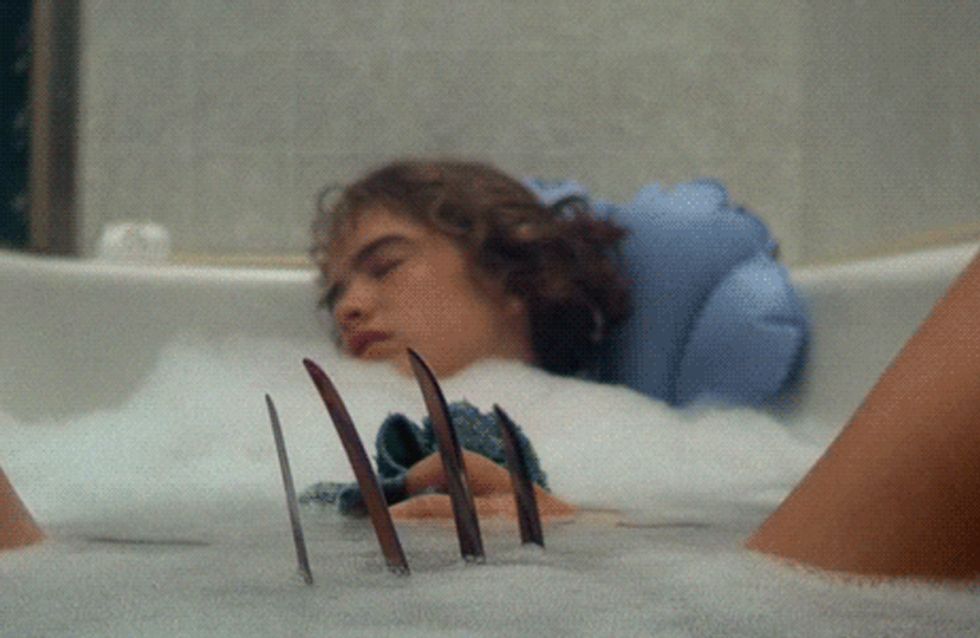 Halloween is fast approaching, and it’s fair to say that most people will be tuning into their favourite gore-fest flick for hallows eve. We’ve all seen them: Scream, Hostel, Saw, the list of torture-centred movies goes on. Slasher movies are beginning to define horror now, and since the presentations of women in these sorts of films are, frankly, terrible, here’s why we think the horror genre is a stab in the back for feminism...

The Silence of the Lambs, The Exorcist and The Blair Witch Project are some examples of horror movies with empowering female leads. The only problem is, we’re not sure how many more we could name. It seems more often than not that, specifically within the horror genre, female characters are not written with any sort of personality but are instead portrayed as sexualised victims of terrible assaults. This is why many feel that horror movies have become more like torture porn in modern cinema, taking a huge step backwards for women in film due to the obvious reintroduction of the 'damsel in distress.'

Whilst there are plenty of male characters in the Saw franchise who have terrible torture and murder scenes, critic Jodie Keisner stated: “Female deaths in horror films are focused on to a far greater extent than their male co-stars.” So why is it so necessary to have gruesome and prolonged deaths for the female characters but not the males? Why is it so much more popular to see women assaulted on screen, and how has no one seemed to realise how messed up this is?

In the first ever scene of Scream, a young Drew Barrymore is making popcorn when a random stranger calls and flirts with her down the phone, prompting her to deny that she has a boyfriend. On discovery that the caller is outside her home and has her boyfriend tied up and savagely murdered in front of her before she is eventually killed, this makes us want to know – why is it always the awkward, sweet and innocent girls who are allowed to live whilst any and every sexualised female character almost inevitably murdered? As a common plot device in horror, it seems almost as if a brutal death is punishment for a character’s sexual exploits, and that right there is Messed. Up.

A naked girl receives a kiss on her forehead before being slashed to death with a scythe. This scene was so graphic that it was cut in Germany, New Zealand, Malaysia and Singapore, and yet it is globally still considered an acceptable scene for a horror film.

The Last House of the Left

The 2009 movie saw two girls, Mari and Paige, kidnapped by a thuggish man, Krug, and his family. Throughout the course of the movie, Krug forces his son to fondle Mari before brutally raping her then stabbing Paige to death.

Paris Hilton running around in her underwear before being impaled on a pole pretty much speaks for itself. Meanwhile her best friend (and the only other female character in the film) was having her lips superglued together whilst tied up in a basement before eventually being rescued by Chad Michael Murray. Eye roll. Empowering. NOT.

A 10-minute scene sees the last survivor of the massacre, Sally, undergo ridicule and torture as she helplessly begs for her life.

We would have loved to have seen the testosterone-fuelled, burger eating, darts playing writers room that came up with this one. Let’s make an hour and a half of a spring break, bikini clad pool party…but with piranhas! The 3D version was even called Piranha 3DD. Oh, here’s the poster. Eye rolls welcome.

Torture, sexual assault and decapitation are just a few things the female leads go through in this film, along with a lot of sadistic screaming, crying and begging as well, obviously.

As mentioned earlier, naturally there are scary movies that do not follow these anti-feminist rules, with movies such as The Blair Witch Project, Alien and The Cabin in the Woods rejecting the new(ish) slasher genre that seems to have become the norm. We'd like to see more of movies like these ones, please. Ones where a woman's character is developed; her personality more than a vacuous pretty canvas that screams, and where, heaven forbid, perhaps they can even be classed as the hero.

Do you agree that the horror genre is predominantly anti-feminist? Tweet us @sofeminineUK.