by Emmy Griffiths Published on 25 September 2014 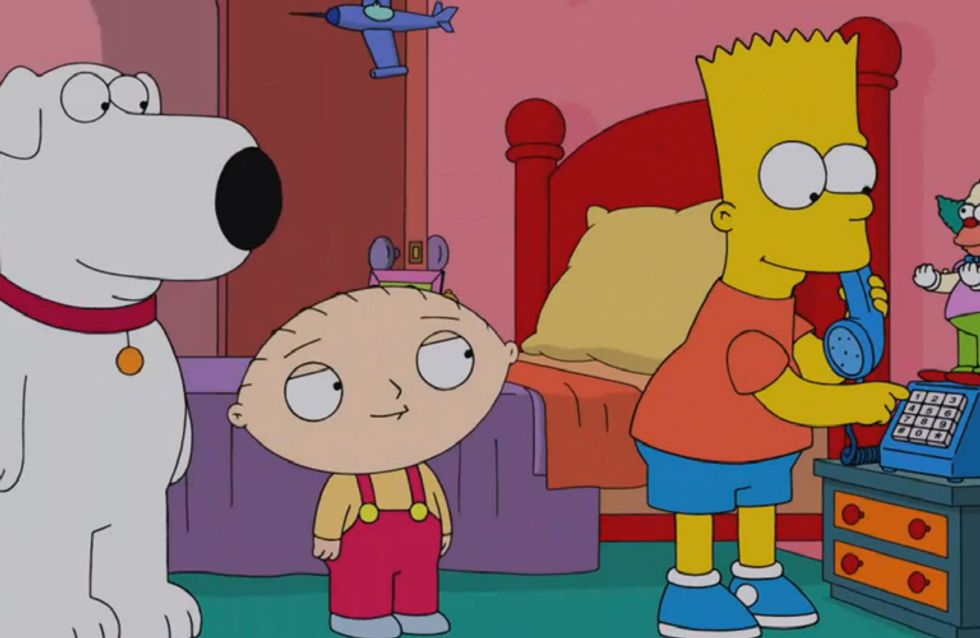 Although the eagerly awaited Simpsons and Family Guy crossover hasn’t hit our screens yet, the episode has already caused its fair share of controversy after the sneak peek featured a joke about rape. Calls from The Parents Television Council to remove the joke from the episode has led us to ask the question – is it ok to EVER make these kinds of jokes?

In the most recent case, the rape joke appears in the Family Guy/Simpsons crossover in a scene where Bart brags about his prank phone call skills, making a typical PG phone call to Moe’s Tavern when Stewie has a try, telling him: “Hello Moe? You sister’s being raped.”

We get it. Family Guy is notably taboo, with creator Seth MacFarlane regularly using offensive subject matter for humour, including domestic violence, Nazis and AIDs, and in comparison with The family-friendly Simpsons, the joke seems baffling and unfunny.

But does this excuse deriving humour from this sort of subject matter? We don't think so, particularly in regards to the considerably younger-than-usual audience that will tune in to watch the Family Guy/Simpsons crossover.

PTC President Tim Winter agrees, saying in a statement: “Rape is never a laughing matter. Never. It is simply indefensible for a broadcaster to use the publicly-owned airwaves to make a tasteless and senseless joke about rape.

“Our hope is that Fox…contemplate the devastating impact their actions could have on countless past, present and future victims of sexual assault.”

Not the only ones

As Vulture magazine pointed out in the clip below, other comedies including 2 Broke Girls, Glee and Wilfred have all made light-hearted references to rape, despite many of these shows once again being aimed at a teenage audience.

We think these shows, particularly in a society where rape culture has only grown with the proliferation of slut shaming, objectification of women dubbed as ‘lad banter’ and the walk of shame to be considered the norm, have a responsibility to influence the attitude towards these issues, particularly to young people, and yet they are doing the very opposite by trivialising a major problem; rape is a reality for 1 in 5 women according to Rapecrisis.

Are these jokes ever acceptable?

Although the subject matter is a serious one, it can be argued that these jokes are not only for shock value but also to regain control of the constant threat women are under. Television writer Jill Soloway told The Daily Beast: “I think not allowing women to joke about rape is like not allowing people to process and let off steam about one of the main fears of our lives.”

Indeed, in regards to the South Park/Simpsons crossover, spokeswoman for the Rape, Abuse and Incest National Network Katherine Hull Fliflet has stated she does not find the line offensive: “I think the show is making it clear that rape is not funny by how they are positioning the joke. It's my hope that would be the viewers' take-away."

Where do you stand?

What do you think? Should these jokes be banned under the fear that they trivialise rape? Or is it important for such matters to be commented on in mainstream media rather than ignored? Tweet us @sofeminineUK.