Miley Cyrus is under fire again. This time because the 20-year-old Wrecking Ball singer - who was dressed in a breast flaunting Lil Kim costume for Halloween - was pictured with an “open liquor bottle” and was also reportedly snogging 34-year-old rocker Benji Madden. Doesn’t Miley ever want to spend an evening tucked up with a mug of hot chocolate and a good book?

For Halloween the We Can’t Stop singer went to a star studded Halloween bash dressed in a risqué costume as rapper Lil’ Kim, which saw her pretty much exposing her entire left boob.

But that was certainly not the most shocking thing that happened that night, as 20-year-old Miley was photographed in the back of a car holding an open bottle of what appears to be Malibu rum.

The legal drinking age in the US is 21 – so she’s clearly breaking the law.

Her friend also has an open bottle of Jack Daniels whisky in her hand and Miley is seen trying to shield her face with one hand to prevent being recognised.

Benji – whose brother Joel is married to Nicole Richie – was reportedly canoodling with the former Disney star at the party and the two left together to go to an afterparty.

Despite the 13-year age gap, the pair were allegedly getting very cosy and were even seen locking lips at West Hollywood nightclub Bootsy Bellows on Thursday according to the MailOnline.

An insider revealed that the rocker and the Wrecking Ball singer were “making out” after being introduced through a friend at singer Adam Lambert's Halloween Party.

According to an onlooker Miley, who looked “amazing” in her Lil Kim outfit, and the black-clad rocker with skeleton-like face paint hit it off pretty quickly.

“They seemed really into each other. Soon they were flirting and talking very closely. Then they shared a kiss. They left Bootsy Bellows together around 1 am,” an eyewitness at the event told the MailOnline.

“They tried to be discreet by sharing a car with some other friends but it was clear they were leaving as a couple.”

What do you think of Miley’s latest controversial antics? Tweet us @SofeminineUK. 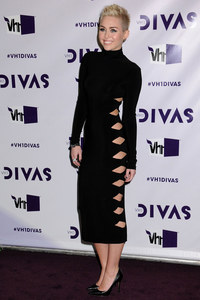