Usher Just Introduced Everyone On SnapChat, And Now The World, To Usher Jr 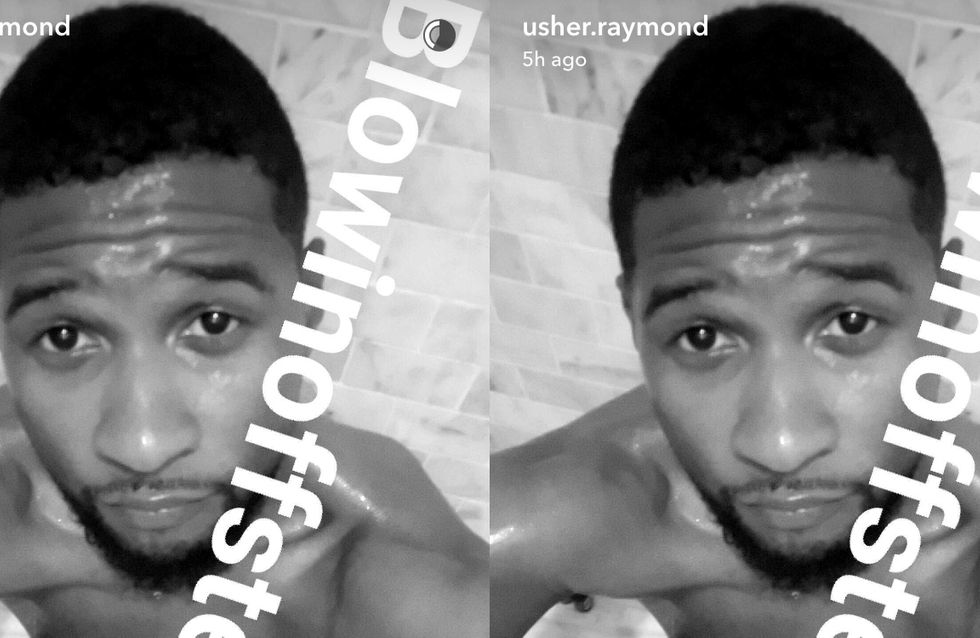 We're not going to sugar coat it: yes, Usher Jr is the name we have adopted for Usher's penis. He might have made his, ahem, debut on Snapchat but now the whole world has made eyes at him. We've done a lot of things on Snapchat due to boredom but flashing our vajayjays is not one of them. Usher, this time you've really outdone yourself.

Is there not a single thing that'll make Usher blush(er)? As if releasing songs with such explicit lyrics as "love when I make you cum, I make it gushy" and "I can tell you been eating your pineapples, girl, your pussy tastes like pineapples" wasn't enough for Usher (just FYI, if a girl tastes like pineapples it's because she's rubbed a pineapple on her nethers. Eating enough pineapples to make your vagina actually taste like a pineapple would take so much pineapple that I'm pretty sure you'd be in hospital with bleeding gums from all the acid before you can even profess to having a sweet-tasting cat), he just made Snapchat an x-rated zone too.

You gotta hand it to him: is there anything that Usher can't make insanely creepy? Usher could take a scarf covered in cute baby owls, knitted by my nan, and somehow make it so overly sexual that I'd have to burn it, becoming so inexplicably mad at my sweet, old nan that I'd be dodging her Sunday roasts forever.

He could take my night guard in his hand and look at me, biting his lip, with that knowing smile that says "awww yeah, I'm gon' make this real weird, ya'll," and that would be it - I'd pour acid over it and just grind my teeth for the rest of my life until there was nothing left but chalky stumps.

So, Usher's latest Snapchat story was both a huge - and we mean huuuge (even carefully placed emojis couldn't conceal his baby maker) - surprise and not a surprise at all. It all starts off pretty kosher: it's just Usher showing everyone his house, his fancy flower pot, his bedroom - and, of course his bedroom has a fireplace in it, in front of what else are you supposed to make naked cheese fondue?

Then it starts. "Steam," Usher says, "steamin with my S7." The shirt comes off. The shower goes on. He's in the shower with his phone, which to us normals seems insane but remember ladies: he can ruin iPhones. He's Usher. iPhones are merely just another tool in his sexual repertoire. There's probably a whole drawer full of them, right under the one filled with pineapples (drawers in Usher's house go in matter of importance, just FYI).

Then, THEN, before you know it, there he is, Usher Jr, slightly peeping out to say hello from underneath a shocked emoji. (No wonder.) The image is classic Usher - far enough and creepy enough to make you wince slightly, like Usher's standing right behind you, whispering "it's Urrsherr, baby" right in your earhole. It's also a really weird picture, like the kind guys take when they're drunk and think it's funny to send all their mates a picture of them doing a poo to their Whatsapp group for a laugh. Also - is Usher skipping leg day?

Don't get us wrong: if we tune out all the creepy lyrics in Usher's songs, and ignore some of the hand gestures he makes in his music videos, and stop looking at his Snapchat, we could get on board with Usher. I mean, he practically raised Justin Bieber and look how... Oh. Anyway, leave something to the imagination, yeah Ush?

What do you think of Usher's new snapchat story? Let us know! @sofeminineUK