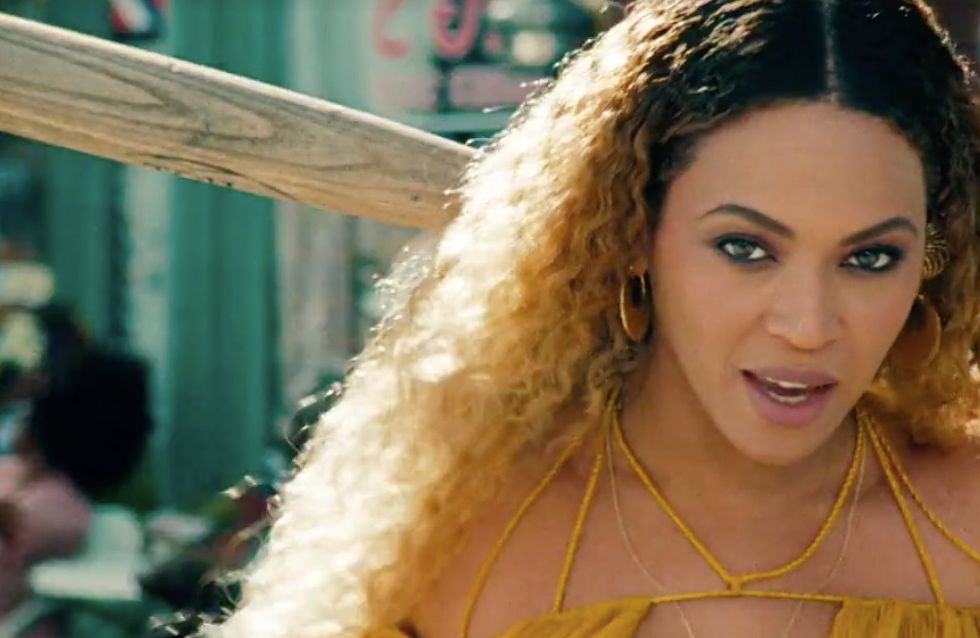 On Saturday, Beyonce dropped her new visual album Lemonade, and like bees (or Beys) round honey, we lapped it up with glee. From the cheating claims to the outfits to the cameos, the world hasn't stopped talking about it since its premiere on HBO and tbh we can totally see why. Here, we give a rundown of things you should all know about Lemonade.

A whole bunch of music greats worked on Lemonade

The first recognisable voice beyond Beyonce's doesn't appear until '6 Inch', the fifth song in the album, where we hear The Weeknd's distinctive voice. But nearly every single song on the album is a collaborative effort with other artists, which is why the sounds are so diverse: Kendrick Lamar raps on Freedom, Vampire Weekend's Ezra Koenig and EDM giant Diplo helped to create 'Hold Up', Jack White worked on 'Don't Hurt Yourself', and British electro master James Blake sings with Bey on 'Forward'. Songwriting credits also go to Father John Misty, formerly of Fleet Foxes and Rae Sremmurd's Khalif Brown.

In 2013, Beyonce featured a sample of the feminist writer Chimamanda Ngozi Adichie from her Ted talk reading of her famous text 'We Should All Be Feminists'. This time, the breaks between the songs in Lemonade are filled with dark poems from British-Somali poet Warsan Shire. Poems include "For Women Who Are Difficult To Love," "The unbearable weight of staying (the end of the relationship)," and "Nail Technician As Palm Reader." You can listen to Warsan and read her poems here.

It seems Jay Z might have cheated on Beyonce with "Becky with the good hair"...

Seems like Solange might not have been so crazy in the elevator now, huh? If you've been paying any attention to the lyrics in Beyonce's latest album, you might notice the not-so-subtle theme of infidelity. Yes, it seems like Jay Z and Bey might not be as crazy in love as we first thought. Many people are believing that Jay Z cheated with American fashion designer Rachel Roy, who Beyonce refers to in 'Sorry' as "Becky with the good hair". Just hours earlier, Rachel Roy posted a now-deleted picture to her Instagram featuring the caption "Good hair don't care, but we will take good lighting, for selfies, or self truths, always. Live in the light". Roy has since made her Insta private after an instant backlash from Beyonce fans. Ain't no messing with the Beyhive!

The Lemonade visuals feature work from a ton of talented directors

Of course, we all know, a Beyonce project is helmed by Beyonce, but there were several directors who collabed with Queen Bey to make the Lemonade film for HBO, including Kahlil Joseph, who previously made Kendrick Lamar's 15 minute m.A.A.d film; Melina Matsoukas, NYU and American Film Institute graduate who created the powerful video for Formation; Dikayl Rimmasch, who has worked with both Beyonce and Jay Z on their short film 'Bang Bang' (AKA 'On The Run Pt. 2'); Todd Tourso, Beyonce's creative director, who is responsible for her artistic direction; Jonas Akerlund, who previously worked with Bey on 'Haunted' and on Jay Z's 'On The Ru' documentary; and Mark Romanek, who helped create the softer elements of Lemonade, like the intimate moments between Bey and Jay Z in 'Forgiveness'.

Bey really mixes up the sounds

This could be the most creatively diverse album we've heard from Beyonce. It's helped by the visual impact of the different sections of the album, which switch from sadness to craziness to ruthlessness to forgiveness. We hear sad, soft pianos in 'Pray You Catch Me,' Caribbean beats as Beyonce smashes shit up in a STUNNING dress in 'Hold Up,' gruff guitar licks and screeching vocals on 'Don't Hurt Yourself,' country riffs in 'Daddy Lessons,' and 70s blues, rock and gospel punched out in 'Freedom'. The mixed sound means there's something out there for errrybody.

In the short but moving video for the 'Forward' section of Lemonade featuring James Blake, the film visits the mothers of Trayvon Martin, Eric Garner And Michael Brown. Because the film isn't just about being a woman who is cheated on, it's about Beyonce being a black woman in America in times of racial tension. It's well known that Beyonce and Jay Z are supported of the Black Lives Matter movement, infamously paying the bail for many protesters who were incarcerated after protests in Ferguson.

It features samples from non other than Soulja boy

Who woulda thunk it? Soulja Boy's 'Turn My Swag On' making it into a Beyonce song? But made it he did, as she croons "I take a look in the mirror say what's up what's up what's up" in 'Hold Up'. Other samples include the Andy Williams' 'Can't Get Used to Losing You' and Yeah Yeah Yeah's 2003 hit 'Maps,' also in 'Hold Up,' and a sample of Led Zeppelin's 'When The Levee Breaks' on 'Don't Hurt Yourself.'

There are cameos from some of our favourite women

Yaaaas Bey! It wouldn't be a Beyonce video if we didn't come away feeling inspired and empowered. And luckily for us, Lemonade featured cameos from some of our favourite boss ass bitches, including Serena Williams writhing round Beyonce in 'Sorry', model Winnie Harlow, 12-year-old Oscar-nominated actress Quvenzhané Wallis, Disney star Zendaya and Hunger Games star Amandla Stenberg sittin' in a tree in 'Freedom', ballerina Michaela DePrince, and of course Blue Ivy and baby daddy (and potential cheater?) Jay Z.

What do you think of Lemonade? Let us know! @sofeminineUK

​​​23 Ways Dating Was Better In The Nineties